Even though the primary deficit has been falling, the rise in country risk reflects a deep distrust in Argentina’s ability to repay its public debt. The way out is not to change the cabinet or the candidates for the polls, but to take steps in the direction of structural reforms demonstrating the decision to build […] 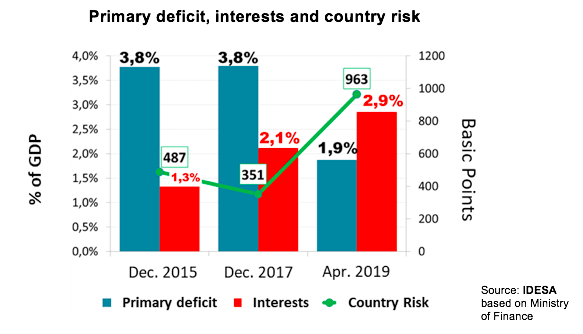 The “country risk” is the difference in interest rates that emerging countries must pay above what the United States pays if they want to take debt in the international market. This difference reflects the level of distrust that investors have regarding debt repayment. For example, when there is an increase in the risk of a country not meeting its public debt, investors demand higher interest rates, thus raising the difference with the United States. It is measured by basic points, that is, 100 points equals an additional 1% interest rate.

Country risk in Argentina reached 963 basis points. This means that, if the Argentine state wants to take debt in dollars in the international market, it has to pay interest rates in the order of 10% per year in dollars over that paid by the US Treasury bonds. This gap means that the Argentine state has virtually closed access to credit in the financial market.

The credibility on the capacity to pay a country’s public debt depends on the current fiscal situation, indebtedness and, fundamentally, on how the future is envisioned. Based on information published by the Ministry of Finance, the dynamics of these variables can be analyzed since the time the current government took office:

These data show that in the first half of the current government’s administration there was a high level of confidence reflected in the decline of the country risk, even though the primary deficit remained the same as at the beginning of the administration. In the second half, the situation was reversed when it was made clear that efforts to lower the primary deficit were not enough to compensate for the increase in interest rates. As of April 2019, even though there is a sharp decrease in the primary deficit, interest continues rising. In this context, mistrust surged, taking the country risk to surpass 900 points.

In the country risk assessment, electoral polls tend to be given a very high profile. This view ignores that, beyond the willingness to pay the debt, there is evidence that cast doubt on the feasibility that the repayment is possible. Therefore, less energy should be put in the electoral strategies and more efforts in designing actions to generate fiscal solvency. This is a more complicated challenge than reaching the zero primary deficit target since it implies to convince that over the next years spending will not surpass public income.

Fiscal solvency will not be obtained with a conventional fiscal adjustment, such as the one applied by the government, but with a comprehensive reengineering of the public sector. This involves, at least, three reform areas. On the one hand, the pension reform, which should tend to level the retirement age to 65 years; avoid that the pension to the spouses due to the death of the retiree generates double benefit; and review the application of the inflation index rule to the moratorias (retirements without contributions) when they overlap with a second retirement. The second is the tax reform that should tend to unify national, provincial and municipal taxes to increase tax collection by lowering tax pressure expanding the tax base. The third is the administrative reform to eliminate federal agencies that overlap with provincial and municipal functions or with other agencies at the federal level.

Whatever the electoral result, no political force will have enough support in Congress to implement these reforms; furthermore, they will also require agreements with the provinces. Therefore, the most relevant fact now is not who wins the ballot polls and who will be the opposition, but achieving that both agree, with political maturity, in a transformation strategy that leads to building fiscal solvency.