﻿ There is no a lack of dollars, but a surplus of pesos - IDESA

There is no a lack of dollars, but a surplus of pesos

Given the fall in reserves, the government decided to tighten the exchange rate control. It is overlooked that the growing demand for dollars originates in monetary emission excess. The solution is not in the Central Bank but in the rest of the government, which should address a public sector ordering. 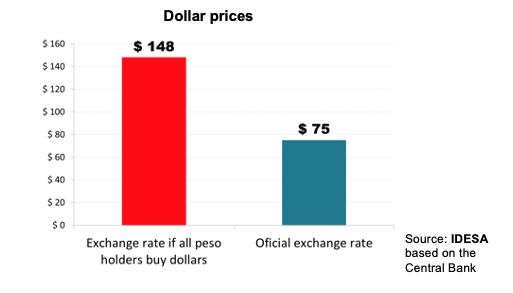 The Central Bank faces a sustained loss of reserves. A leading factor is the purchases of dollar small-savers. Even though they are limited to only U$S 200 per month, the Central Bank in July had to sell U$S 600 million, in August U$S 1,3 billion, and only in the first 15 days of September, it sold U$S 1 billion. Given that each citizen is entitled to a fixed monthly amount, the increase in the dollar demand means more people are demanding dollars from the Central Bank. This led the national government to tighten the exchange rate control.

The possibility of all citizens to access the official exchange market to buy U$S 200 per month was restricted to some (for example, those who receive social plans will not be permitted to do so). Furthermore, expenditures in dollars with credit cards are counted within the U$S 200. Private companies with dollar debt were forced to renegotiate with their creditors in order to decrease debt payments in dollars.

What are the reasons that there are more and more people demanding dollars from the Central Bank? In order to investigate the answers, it is useful to take as a starting point that the official dollar is at $75. According to data from the Central Bank, in the market for pesos and dollars, it can be seen that

These data show that, if all the pesos that people hold turn to buy dollars, the exchange rate would tend to AR $ 148, far from the government’s AR $ 75 set. Although this is an extreme hypothetical simulation, it is not by chance that the dollar in the black market is traded at values close to this amount. In other words, the massive issuing of money has generated a significant inconsistency between the official price of the dollar and the quantity of money available.

Since the new government took office until March –when the lockdown begins– only 70% of the public expenditure was financed with taxes, while the remaining 30% was covered with monetary issuing. From April onwards, the national public expense portion financed with money issuance grew to 40% due to the fall in tax collection and the increase in public expenditures due to the lockdown. The quarantine, price controls, and the fixed official exchange rate have allowed containing the impact on inflation. The INDEC reports average inflation of 19% between January and August 2020. Increases vary from 8% in communication, 10% in private health, 14% in transportation, and 19% in private education, but 23% in food and 33% in clothing. In other words, the excess in monetary expansion has a much greater impact on non-controlled prices. The dollar is the variable where the money issuing excess hit most quickly because it is a savings instrument.

The diagnosis that the dollar scarcity is the cause of the exchange rate volatility is wrong. Actually, the lockdown restricted tourism abroad and generated a sharp drop in imports. That is why it is more plausible that the growing demand for dollars has its roots in the people’s excess of pesos.

The Central Bank has no instruments to calm the dollar since the abundance of pesos derives from the growing fiscal deficit. Therefore the responsibility lies in the rest of the government, who must eliminate the fiscal deficit. Otherwise, the Central Bank will be forced to devalue the official exchange rate triggering the inflationary acceleration contained precariously with price controls.