﻿ There is still AR$1.2 trillion in excess of monetary expansion - IDESA

There is still AR$1.2 trillion in excess of monetary expansion

In the first half of the year, the government reduced the fiscal deficit and the money emission. However, the situation is still extremely precarious, among other reasons because of last year’s large monetary expansion. In this context, more public spending will not reactivate the economy but will deepen the crisis. 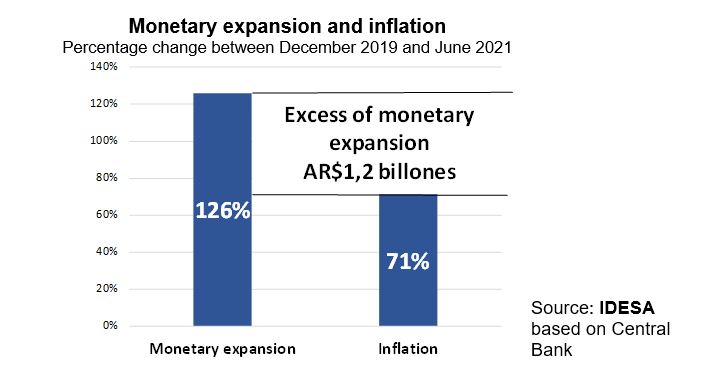 In the first half of the year, there was practically no primary fiscal deficit (the deficit was $55 billion or 0.1% of GDP) and there was little assistance from the Central Bank to the Treasury ($300 billion or 1% of GDP). In addition, the increase in soybean prices allowed the Central Bank to increase its reserves by US$ 3,5 billion so far this year. These conditions allowed inflation to remain at high levels, but not accelerating, and the gap between the black market and the official dollar did not widen.

Because of this relative calm, some sectors of the ruling coalition propose a relaxation. The logic would be that putting money in people’s pockets will increase consumption, which will reactivate the economy and thus employment as well. In this way, fiscal and monetary easing will generate a virtuous circle of more consumption, more production, and more employment. This idea has a political intention, as it aims at reaching the mid-term elections with a more favorable climate for the ruling party.

Are the conditions in place ready for more public spending to boost the economy and employment? To find answers, it is useful to appeal to Central Bank data on the monetary situation. According to this source, it is observed that between December 2019 (when the current government takes office) and June 2021:

These data show that inflation has not yet reduced in real terms the huge monetary issuance of 2020. This is a warning that there is a large amount of pesos held by the public that can be used to buy dollars. The Central Bank indeed recovered reserves, but they are still U$S 2.4 billion below the level it had in December 2019. In other words, there are many more pesos and fewer dollars than when the government took office. Under these conditions, a new massive monetary expansion could trigger a run to the dollar, which would aggravate the exchange rate and inflationary crisis.

There is a contradiction within the government. While one part of the coalition is pushing to put money into people’s pockets, another part is trying to prevent the current excess of money issuance from aggravating inflation and the dollar pressure. The most obvious evidence of this contradiction is the policy pursued by the Central Bank. The monetary authority withdrew some AR$5 billion of the AR$1.2 trillion excess from the market through Leliqs and pases. The Central Bank absorbs this money by paying interest. Therefore, it does so under the diagnosis that, under the current conditions, monetary easing will not favor consumption and economic revival, but rather more inflation and pressure on the dollar.

Very weak foundations underlie the relative calm of the dollar in the first half of 2021. On the one hand, the fiscal deficit reduction is precarious since it was based on extraordinary revenues from soybeans and the transitory loss in the real value of salaries, pensions, and other social benefits. In the second half of the year, this dynamic will be reversed. On the soybean price side, it is certainly an important “tailwind”, but objectively the recovery of reserves by the Central Bank has been partial, even with the strict exchange rate regulations.

Relaxing fiscal and monetary policy under the current conditions is a risky alternative. That explains the Central Bank’s well-founded fear that the crisis will deepen with more monetary expansion. Whether more issuance in the short term could improve the government’s chances in the elections is a matter of opinion. What is certain is that the longer a comprehensive reorganization of the public sector is delayed, aimed at building a more solvent and professional public sector that provides better services to the people, the greater will be the productive and social damages.