﻿ To increase domestic consumption, exports must also be increased - IDESA

To increase domestic consumption, exports must also be increased

The argument that exports compete with domestic consumption is back. The corollary is the idea that in order to protect consumption, exports must be limited. But the solution is the other way around. Exports must be increased to generate the foreign currency needed to expand production and consumption. 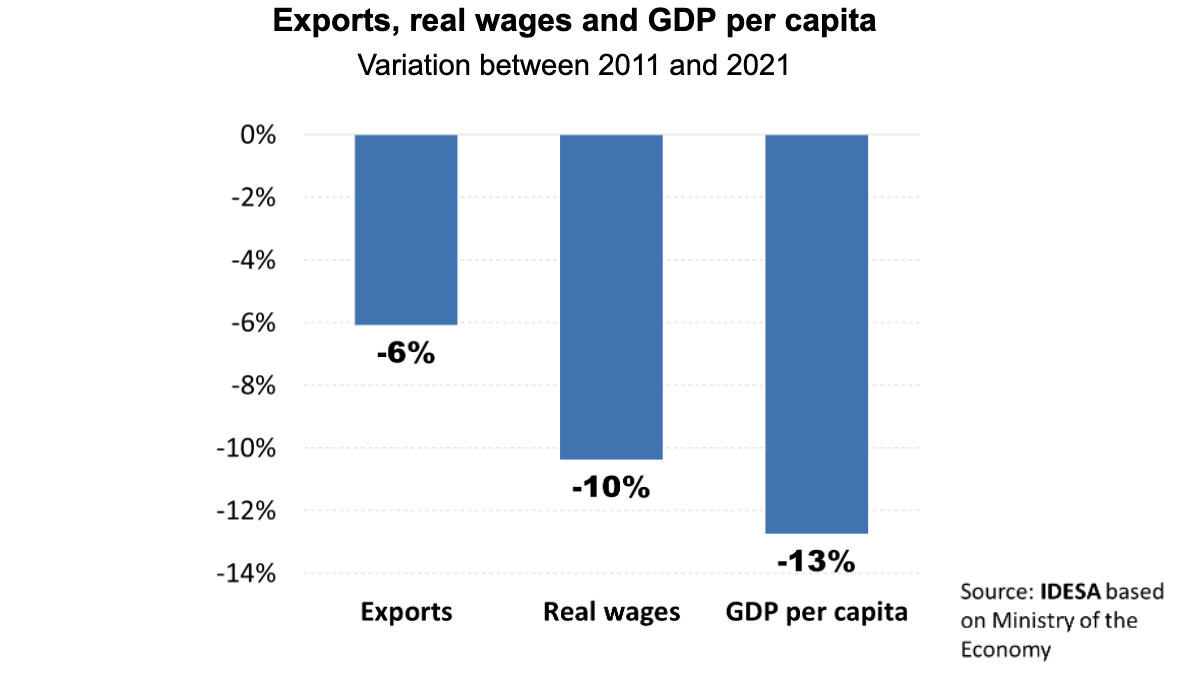 The acceleration of inflation has sharpened the internal conflicts within the government. Given the evident failure of the price controls and the strategy of threatening companies to fight inflation, the insiders that promote these actions began to focus the blame on the Minister of Economy and on the war in Ukraine, which is causing international prices rises. In a somber tone, they stated that the social situation will worsen if exports are not restricted in order to protect domestic consumption.

The idea that exports compete with domestic consumption is very old. It dates back to the middle of the last century and was based on the fact that the bulk of exports consisted of the same products that made up popular consumption. Put in a simplified way, increasing exports of meat or wheat implied less domestic consumption of these foods. This vision fell into disuse towards the end of the last century in the context of greater diversification of exports and household consumption. The new paradigms now revolve around the idea that development depends on closer integration with the world.

In view of these old ideas return, it is worth asking what the evidence says about a possible conflict between exports and domestic consumption. According to data from the Ministry of Economy, between 2011 and 2021, it can be observed that:

These data show that reducing exports does not guarantee higher domestic consumption. In the last decade, lower exports were accompanied by falls in real wages, the main determinant of domestic consumption. The key to understanding the fall in real wages is the drop in GDP per capita. When GDP per capita decreases, it means that there are fewer goods for each person. This translates into lower wages which is the factor that limit the peoples’ consumption capacity.

Currently, the main constraint to importing the capital goods and inputs needed for production is the scarcity of foreign currency. This implies that in order to increase production, wages, and domestic consumption, it is necessary to expand exports since this is the most genuine way to generate foreign currency. Restricting exports accentuates the external restriction, that is, the shortage of vital foreign currency to finance the imports that mobilize domestic production. Therefore, it is no exaggeration to say that the idea that exports compete with domestic consumption is as outdated as illogical.

A specific and concrete example of how exports increase domestic consumption is provided by Uruguay. The neighboring country is one of the largest per capita exporters of “premium” meats. When the price of meat increased in the domestic market, exports were not banned, but rather popular cuts of meat were imported from Brazil and Paraguay. In this way, Uruguay continues to export high-priced meat and imports low-priced meat to supply the domestic market. This type of strategy is what makes Uruguay the country with the highest GDP per capita and, therefore, the highest real wage in South America.

The solution is to export more, not less. To achieve this, it is essential to advance in a comprehensive reorganization of the public sector. With a financially balanced public sector providing high-quality public services, the conditions to multiply exports will be settled. The way to overcome the external restriction is to organize the State. On the contrary, restricting exports even more, as proposed by a sector of the government, will accentuate the external restriction, aggravating the recession and social degradation.