﻿ To Put an end to Welfare, employment must grow 50% - IDESA

To Put an end to Welfare, employment must grow 50%

The transformation of welfare plans into quality jobs is an enormous challenge due to the magnitude and characteristics of the people involved. Therefore, proposals not contemplating an integral State’s reorganization and labor institutions’ modernization are pure voluntarism. 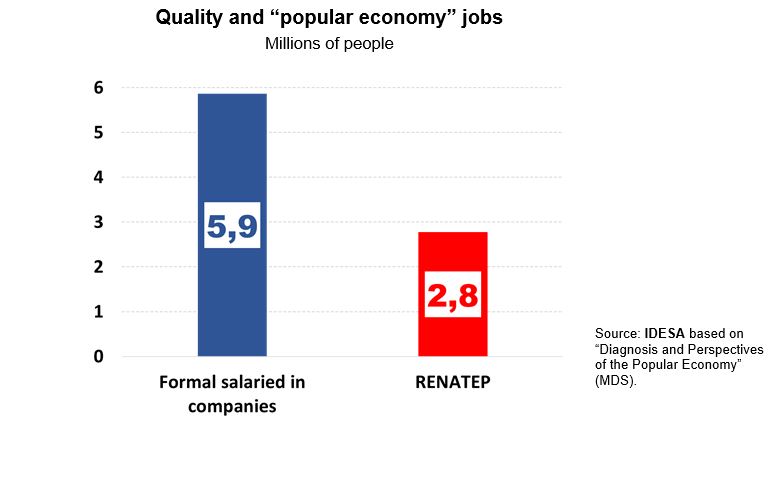 The Ministry of Social Development published an interesting report on the people registered in the National Registry of Popular Economy Workers (RENATEP). It shows the magnitude, personal characteristics, organization of productive units, territorial distribution, and activities of the people working in what is called the “popular economy”.

The Registry gives visibility to individuals that receive welfare through social organizations (piqueteros). The predominant group is people who collaborate in community canteens in poor neighborhoods. Other important occupational categories are people who work in cleaning, agriculture, street vendors, and construction. From the political point of view, it shows the people that the ‘piqueteros’ claim to represent. From the social point of view, they are vulnerable people facing serious difficulties in obtaining good jobs.

Among the information provided by the report, a suggestive starting point for the challenge of changing welfare plans into good jobs stands out. According to this source, it is observed that:

These data show that to provide a good job to people of the “popular economy” Registry, companies would have to increase employment by 50%. Assuming that the economy grows at a rate of 3% yearly (target set in the 2022 Budget) and that for every 1% growth in output, registered salaried employment grows by 0.5% (observed in periods of growth), it would take 25 years to generate the jobs needed to change the welfare into quality jobs. In the north of Argentina, the challenge is extreme because there are more workers in the “popular economy” Registry than formal jobs in private companies.

Such an expansion of employment requires the multiplication of companies and the elimination of all legal factors that discourage hiring. This means a profound transformation of labor institutions replacing outdated and socially inefficient rules. But the main challenge is to address a comprehensive reordering of the public sector. A key component is the tax system since there is no chance of boosting the economy to generate needed jobs with the current one. In the tax revision, the elimination of the co-participation must be contemplated so that each provincial State finances itself with the added value it generates in the private sector in its geography. A convergence fund for the Northern provinces must be contemplated in order to accelerate its development.

The Register confirms that another part of the problem is the low skills of people living on welfare. Even in case of jobs are multiplied, they could not be filled because the people living on welfare lack the skills to access formal employment. For this reason, the education system has to be freed from vested interests and put to work on reducing school dropout and increasing the quality of education.

Promoting the “popular economy” with special regulations, tax exemptions and subsidies will perpetuate welfare without solutions. It is functional to the interests of the ‘piqueteros’ leaders and the public bureaucracies associated with them, but ineffective in giving people the opportunity to get good jobs and a life of prosperity.