﻿ To raise wages, it is necessary to increase exports - IDESA

To raise wages, it is necessary to increase exports

Reviving the economy boosting domestic consumption is inconsistent with the strategy of preserving the few dollars available. As soon as wages rise, imports will increase, and the dollars will vanish. Solving this puzzle requires a more favorable environment for exports. The national government decided to call for a Social Pact in order to lay the […] 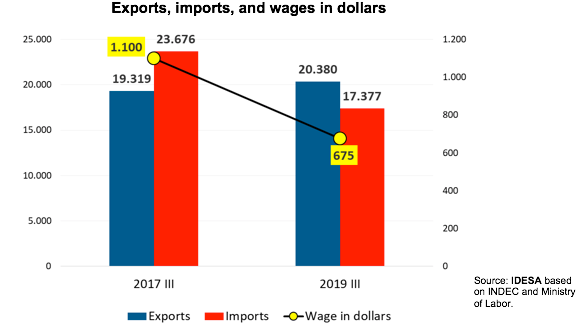 The national government decided to call for a Social Pact in order to lay the foundations for an agreement that would allow the recovery of real wages as a driver for growth. In parallel, it implemented the 30% tax on the purchasing of dollars for trips and expenses abroad. The goal is to carefully manage the scarce dollars available on the official exchange market. The question is: Are these actions consistent?

The genuine source of dollars for the official market is exports of goods and services. The main outflows of dollars from the official market are imports of goods (machines, spare parts, inputs, and consumer goods) and services (tourism abroad and digital services, including entertainment such as Netflix, Spotify, etc). The 30% tax is intended to discourage the purchases of services abroad. Thus, it seeks to prioritize the use of foreign currency to finance imports of capital goods, spare parts, and inputs that the recovery demands.

These data show that, since the beginning of the exchange rate crisis, exports of goods and services have remained stable, while imports have fallen sharply by US$ 6 billion (-27%). From a deficit, it went into a surplus thanks to a sharp drop in imports of goods and services. The key to this drop was the recession led by the fall in wages. The most illustrative indicator is the sharp reduction in private sector wages measured in dollars (-40%). In other words, the external deficit has shrunk for import reductions associated with the recession.

Aspiring to raise salaries in the current context would lead to the reverse course. Higher wages will lead to a recovery in consumption and an increase in imports, which, with stagnant exports, will fatally end up in a crisis due to a lack of dollars. In other words, the objective of increasing salaries, boosting domestic consumption, and thus reactivating the economy is inconsistent, due to the low generation of foreign currency given Argentina’s minimal export capacity.

The exchange rate controls and the 30% tax on imports of services may temporarily disguise the lack of dollars, but they do not solve the underlying problem. On the contrary, boosted by other measures –such as raising export taxes and suspending the cut in Sale tax- the situation worsens because of export discouragement. In this framework, the Social Pact has no chance of promoting improvements in wages. If it did, it would induce increases in imports inconsistent with the few official dollars available.

Declamations around the social dialogue are grandiloquent. However, the role of it can be, at best, to moderate social demands. It may be a useful tool to funnel them peacefully and equitably within the narrow limits imposed by the crisis. But getting out of the emergency and the economic decline call for increasing exports to generate more dollars. For this to happen, it is key to address a deep reorganization of the State at the three levels of government (Nation, provinces, and municipalities). This is the only way to generate a friendlier climate for investment and exports.