﻿ To reprofile debt, Uruguay had 10 years of fiscal surplus - IDESA ﻿

To reprofile debt, Uruguay had 10 years of fiscal surplus

As part of the strategy to deal with the crisis, the government proposed a “re-profiling” of its debt, as Uruguay did in 2003. In the Uruguayan case, the key to success was not the debt rescheduling, but the fiscal discipline that came with it and lasted for more than a decade. The friendly “re-profiling” that […] 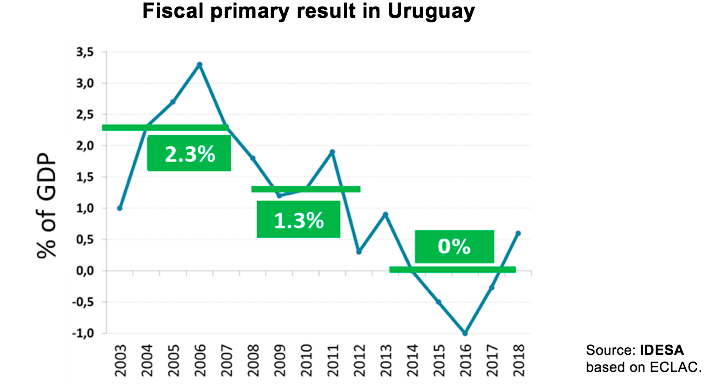 The friendly “re-profiling” that the national government proposes to the creditors has a direct antecedent in the resolution of Uruguay’s debt crisis in 2003. Driven by the collapse of the Argentine economy, Uruguay faced severe difficulties. Given the hurdles to comply with debt services, the country proposed payment postponement without cuts in principal and interest to creditors. The threat of a disorderly default like the one Argentina had declared, contributed to its acceptance.

The results of the Uruguayan “re-profiling” were very positive. On the one hand, conflicts and the isolation generated by a debt default were avoided. But most important is that from 2003 to the present, Uruguay has not stopped growing. Fifteen consecutive years of economic growth at an average annual rate of 4.7% allowed it to reduce the poverty rate from 40% in 2003 to 8% of the population. Had Argentina had that economic performance, its Gross Domestic Product (GDP) would be 22% higher and its poverty rate lowered to a single digit as in Uruguay.

What was the main determinant of Uruguayan success? In order to shed some light on the answers, it is useful to analyze the Uruguayan public finances after the debt “re-profiling”. According to ECLAC data, it can be observed that:

These data show that Uruguay gave sustenance and consistency to the “re-profiling” of its debt based on a responsible fiscal policy. In the early years, this meant high levels of primary surpluses that were later relaxed but always holding a positive budgetary balance. This fiscal performance was what enabled Uruguay to gain creditors’ confidence and promote growth and social progress.

Given the success of the experience, the idea of Argentina imitating Uruguay is pertinent. However, it is essential to assume that the key and most challenging issue is not debt rescheduling but fiscal discipline. In this regard, the antecedents demonstrate that with traditional adjustment policies, it will not be feasible to achieve the needed fiscal results to replicate the Uruguayan experience. For example, after the exchange rate crises of 2018, enormous efforts were made to cut expenditures and increase taxes to achieve a primary surplus of just 0.3% of GDP in the first semester of 2019. That is to say, a far level from the one reached by Uruguay.

The Uruguayan experience also shows the crucial importance of the maturity of political actors. The “re-profiling” of the debt took place in the political transition from a center-right to a center-left party, which sustained fiscal discipline for more than 15 years. In the case of Argentina, more complexity emerged given that agreements with the provinces are needed, at least with the largest ones.