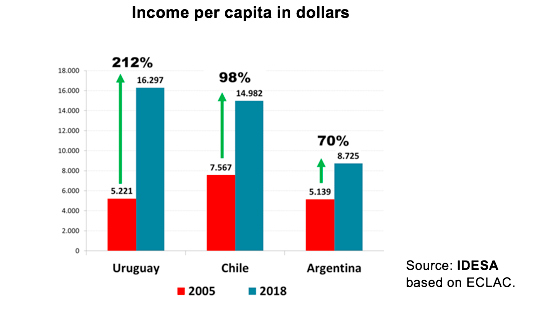 After 14 years of government in Uruguay, the left-wing Frente Amplio has lost the elections. The result was very tight, up to the point that the electoral authorities had to take a few days to determine the winner. In the Latin American context, the Uruguayan electoral process is remarkable. The serenity and strict attachment to the institutions, even when there was a tiny difference in the number of votes, is exemplary. It contrasts with Bolivia, where a left-wing government was also displaced but with serious turmoil, violence, and dead persons.

The Frente Amplio compiled almost twenty left-wing parties. It came to power when Uruguay was in a deep crisis and had to govern during the boom in international prices (2005-2012). It did it with strict respect for private property and sound macroeconomic policy: low inflation, no exchange controls, no spurious monetary emissions. In order to achieve their success, it was key not to fall into irresponsible policies, such as Argentina.

The Uruguayan left-wing coalition met these economic achievements without renouncing its social principles. Unlike Chile, it was able to go through a long period of economic growth while maintaining active redistribution mechanisms that allowed low-income families to enjoy the progress. Unlike Argentina, it was able to incorporate new freedoms without generating confrontations and resentments. With consensus and tolerance, it legalized abortion and the consumption of soft drugs for recreational purposes.

The Uruguayan experience is very instructive. The coalition that will govern Argentina from December, the Frente de Todos, has similarities in its left-wing aspirations. Like the Frente Amplio, the Argentinean Frente de Todos has to address a high level of public debt. The Uruguayan strategy did not impose but agreed with the creditors the “re-profiling” of the debt. They showed strong commitments to the public finances ordering. Income redistribution was not based on “putting money in people’s pockets” but on improving the targeting of social transfers. In order to avoid exchange rate crises, there was no appeal to the prohibitions or to close the economy, but rather investments and exports were stimulated through more integration with the world economy.

Many Uruguayans opted for a change. But the tiny difference in the voting results is consistent with a successful experience that contrasts with the neighboring countries’ failures. Faced with Argentina, with its economic crisis, Chile, with its distributive crisis, Bolivia, with its democratic crisis and Brazil, with its political crisis, Uruguay is a beacon that points out that a country can grow with inclusion, in democracy, without violence, with tolerance and respect for institutions.