Uruguay lowers the price of meat with more foreign trade

The government banned the export of meat to lower its price. There are less rudimentary and harmful ways to care for domestic consumption. A nearby example is provided by Uruguay, which managed to contain the price of meat without harming exports. To achieve this goal, it increased imports of meat. 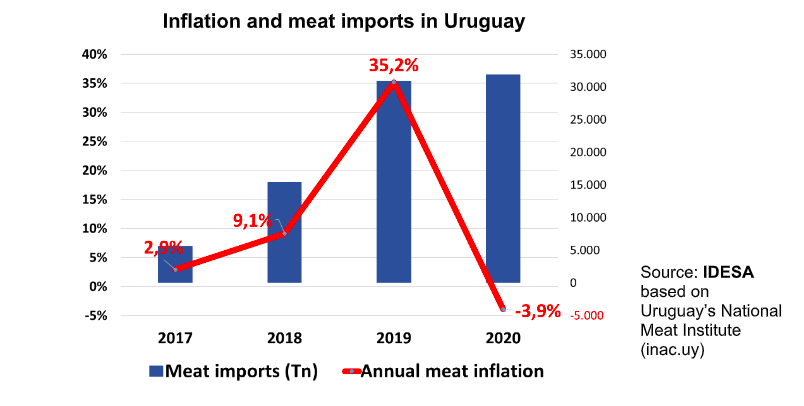 According to INDEC, the price of meat has been increasing by more than 60% when the general inflation rate is 46% per year. The government reacted drastically by suspending meat exports. The idea is to increase domestic supply and thus contain price increases. The measure ruffled agricultural producers and meatpacking plants dedicated to exports. Furthermore, many also criticize the inconsistency of infringing foreign contracts when foreign currency need is imperative.

In this context, many believe –even within the government– that an alternative strategy would be the one implemented by José Mujica in Uruguay. In 2005, when he was Minister of Agriculture, he asked slaughterhouses to allocate popular cuts of meats (skirt steaks) to the domestic market and export the rest. This was called “Pepe’s asado”. A similar scheme was tried in 2011 when Mujica was already president. In Argentina, the belief is that this is the “Uruguayan model” that allowed export growth without affecting popular consumption.

Is the “Pepe’s asado” the Uruguayan model? Uruguay has the highest meat export per capita in the world. According to the National Meat Institute (INAC) of Uruguay, the following trends are observed in the domestic market:

These data show that Uruguay, although a major exporter, did not close its exports when it experienced high meat inflation. Nor did it adopt a passive attitude, but rather appealed to import meat in order to increase the supply in the domestic market and, by that means, lower the price. In 2020, 13% of domestic meat consumption was supplied by imports. In other words, Uruguay, unlike Argentina, moderated the meat price by boosting foreign trade.

The Uruguayan livestock model is much more sophisticated than ” Pepe’s asado”. The axis is the modernization of the production chain from the farm to the foreign consumer with international quality standards and traceability systems to guarantee quality. This allowed the companies to enter the Asian and US markets with high value-added meats, becoming an important exporter of premium meat. The institutional framework used to achieve this success is highly relevant for Argentina. A National Meat Institute was created, which does not regulate the price of meat or exports but is a public-private consortium that works on know-how transfer to producers, the management of the traceability system, and foreign market openings.

When in 2019 the meat inflation hit they did not close exports. The reason is that from a premium cow is not possible to get popular cuts. As it has so much technology incorporated, its meat is very dearly even for cuts such as skirt steaks. The strategy was to continue selling these high-value meats in the international market and to buy cheaper meat for popular cuts to Brazil and Paraguay. This not only implies a price difference in favor of Uruguay (it exports at a high price and imports at a low price) but also avoids destroying the great technological and commercial efforts deployed to place premium meats in the world.

The Uruguayan case shows that there are alternatives for lowering the meat price without putting exports at stake. On the contrary, with such rudimentary instruments as banning exports, enormous damage is caused to production and to the generation of foreign currency. Furthermore, it is very regressive since those who consume the most meat and, therefore, benefit the most from the price reduction, are the middle and high-income families.