Bus strikes in the interior of the country are the consequence of the anachronistic model of collective bargaining. Labor conditions are imposed centrally with contempt about regional differences. The solution is not to re-establish national subsidies but to decentralize collective bargaining. A massive bus strike in several cities of the interior of the country passed […] 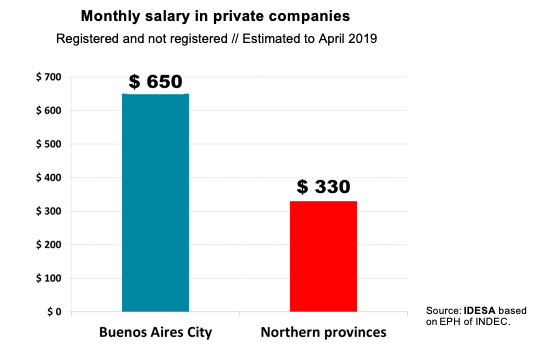 A massive bus strike in several cities of the interior of the country passed unnoticed for porteños. It was a conflict that the national media, based in the capital, took as mere local news. However, its origin has national roots.

The confluence of two factors produces the strike. On the one hand, the collective agreement for urban transport is signed by the Automotive Transport Union (UTA) and the business chambers based on Buenos Aires City reality to be applied throughout the country. The other factor is that transport subsidies from the federal government have been deactivated. This implies that while salaries are set centrally, their financing has to be resolved at the local level. Furthermore, signs that the national government maintained the subsidy to the metropolitan area in order to make the collective agreement affordable ignited the conflict in the rest of the cities.

Is it possible to define in the collective agreement the same level of wages for the whole country? One way to address this question is by comparing wage differences across regions. In this sense, according to the INDEC household survey, it is observed that:

These data show that much higher salaries are paid in Buenos Aires City than in the less developed regions. The explanation is higher productivity linked to the size of the market, human resources level of training, better infrastructure and the use of more advanced technologies, among other factors. Such broad productivity gaps mean that a centralized collective agreement, defined according to the parameters of the Buenos Aires City, cannot be applied in the laggard regions.

This transport case is a testimony of an old and widespread problem of the collective bargaining model in Argentina. The State grants a monopoly of bargaining power to a single central union. The union and the employer representatives sign centralized agreements mandatory to all companies, regardless of whether employers and employees are affiliated to the signatories. Thus, for many firm –especially small ones prevalent in the interior of the country– the wages set centrally in collective agreements are impossible to be paid. This is the main reasons why in the north of the country more than half of the private wage-earners work informally.

The solution is to stop imposing centralized collective agreements throughout the country. The federal Secretary of Labor should open rounds of negotiations at decentralized level. In the case of urban buses, for example, the union of each city should negotiate wages and other working conditions with the business chambers of the region. These negotiations should be based on the inhabitants’s purchase power to afford the ticket and the possibilities of the municipality to subsidize part of the fare. Thus, salaries could be adapted to local conditions.