﻿ Wages will lose out again to inflation - IDESA

Wages will lose out again to inflation

The inflation increase observed in the first quarter of 2021 suggests that real wages will keep falling. Therefore, the social situation will worsen. Tackling the pandemic is urgent. But the most important issue is to roll on a comprehensive reorganization of the public sector in order to recover price stability and economic growth. 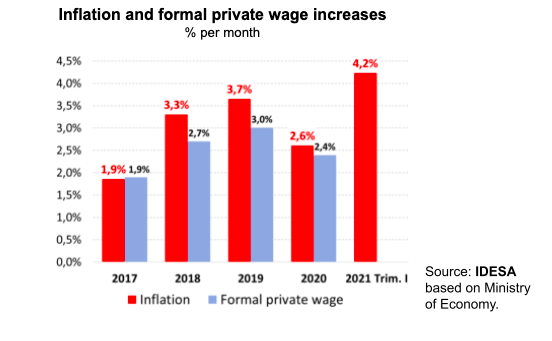 Monthly inflation reached 4.8% in March. This means that in the first quarter of 2021 the monthly average increase in prices is 4.2%. If this trend is not reversed, annual inflation in 2021 will reach 60%. A double of the target set by the government.

The process is surprising and worrying. Especially because the administration has been deploying a wide set of actions aimed at controlling inflation. The devaluation pace and the utility price adjustments are below the increases in prices. Most of the collective bargain among unions is aligned with the official target of 30% inflation. Although the fiscal deficit is still high, it has moderated in comparison with last year and a tighter monetary policy has been put in place. Most of the deficit was financed with public debt and the Central Bank absorbed the last year’s excess of monetary expansion with own debt.

The question that arises is: With the acceleration of inflation, can the government’s promise that wages will beat inflation be fulfilled? Some official data can help to answer the question. According to the Ministry of Economy in the last 3 years, it is observed that:

These data show that, beyond the pandemic, Argentina is going through a new cycle of economic stagnation with high inflation and fall in real wages. The drop in formal workers’ real wages since the beginning of the crisis in 2018 is 15%. The rest of the population’s incomes, such as pensions and informal wages, follow the same trend. Although the forecasts are for economic recovery after the pandemic, with an inflation rate above 4% per month it is impossible for wages to beat inflation in 2021.

As long as inflation remains high, there is no possibility of reversing the fall in social conditions. Any attempt to compensate inflation with higher wage increases will only accelerate it. Nor is it effective to “repress” inflation with exchange rate overvaluation, freezing utility prices, price controls, and monetary tightening through increases in public debt so that wages can surpass inflation.

The fall in real wages has its roots in the malfunctioning of the economy which, in turn, comes out of the public sector disorder. For decades a systematic propensity to overspend and deteriorate the quality of public services prevailed. Neither the previous government nor the current one had any vocation to promote deep changes. The previous one considered that a gradual plan to reduce the fiscal deficit was enough. The current one considers it possible and desirable to keep expanding public spending without any effort to improve the quality of the public services.

The urgent is to overcome the second wave of Covid-19. The priorities are to accelerate the vaccination plan and find the most effective ways to reduce contagion respecting the limits imposed by the fatigue of the last confinement. But the important thing is to take the crisis as an opportunity to fix the public sector. This is a huge challenge because it requires political support and professional skills to deploy an ambitious process of institutional reconstruction.