﻿ Welfare provides only a quarter of the poors’ income - IDESA

Welfare provides only a quarter of the poors’ income

There is a widespread belief that the poor live on welfare. But evidence shows that in the total income of the poor, 3 out of every 4 pesos come from labor. Therefore, in order to reduce poverty, it is more important to reduce inflation and improve the quality of jobs rather than continue expanding welfare. 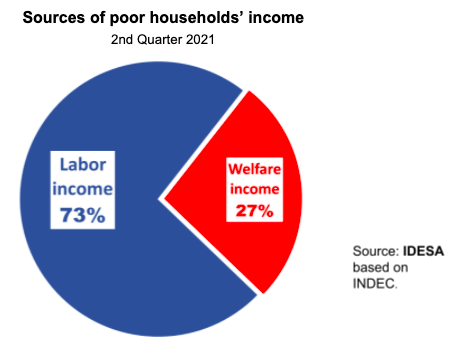 In the 2nd quarter of 2020, when the lockdown was stricter, there were 3 million fewer informal workers, considering as such unregistered employees and self-employed workers. Since informality is closely associated with poverty, it was foreseeable that in the first half of 2020 the incidence of poverty would exceed 40%. In the 2nd quarter of this year –with the lockdown relaxation– all the lost informal employment has been recovered. However, the incidence of poverty remained above 40%.

It is striking that in 2019 poverty was 35% when there were far fewer welfare benefits. In 2019 there were 4.2 million Universal Child Allowances, today there are 4.4 million; the Ministry of Social Development distributed 625 thousand food cards, today it distributes 1.7 million; the same Ministry delivered 775 thousand welfare benefits to protest organizations, while now there are more than 1 million through “Potenciar Trabajo” (Boost Work Program). Surprisingly, welfare plans have multiplied, but poverty remains high.

Why do the plans increase but poverty remains high? To search for answers, it is useful to analyze the INDEC’s data on income distribution. According to this source, for the first semester of 2021 it is observed that among poor households:

These data show that 3 out of every 4 pesos of the income of the poor comes from work. Only a quarter of their income comes from welfare. Welfare was transitorily important for the poor during 2020 when the strict lockdown deprived them of going to work. But in 2021, when the population was freed and returned to the labor market, the main source of income for the poor is once again work.

Underlying the debate on poverty is the idea that the bulk of poor households’ income comes from welfare payments. Based on this diagnosis, pundits argue that more funds must be allocated to welfare in order to alleviate poverty. The evidence is pointing out that the diagnosis is wrong. Even if the poor were to receive more welfare, their total income would increase little because most of their income comes from work. In the same sense, this reality also relativizes the idea that welfare induces people not to work. The data suggest that most of the poor who receive welfare benefits enter the labor market when they have the opportunity to do so.

Evidence suggests that the main tool to fight poverty is to reduce inflation. Income generated through informal work, which is the main source of livelihood for poor households, cannot keep the same pace with prices as formal salaries tend to do. Therefore, in a context of 50% inflation, if the increase in welfare is financed by more monetary expansion (which exacerbates inflation), far from helping the poor, it ends up hurting them even more. The increase in income that comes through welfare will never compensate for the loss of labor income real value that inflation produces.

The other conclusion is that the most direct way to reduce poverty –besides reducing inflation– is to increase the quantity and quality of jobs and the employability of the poor. To this end, it is key to modernize labor and tax legislation, inducing more investment and facilitating the generation of good jobs. On the other hand, children and young people from poor families must have high-quality public education and finish high school. Instead of insisting on welfare, it is crucial to move forward in modernizing labor and tax legislation and public education.