With Evo Morales the GDP per capita has multiplied by 3

The upheaval in Bolivia generates passionate controversies. This obscures the Bolivian remarkable economic and social performance. Regarding the challenges that Argentina faces, Bolivia’s most instructive lesson is that fiscal discipline is a source of social progress. In a controversial and confusing circumstance, the former president of Bolivia, Evo Morales, resigned from his post, denounced a […] 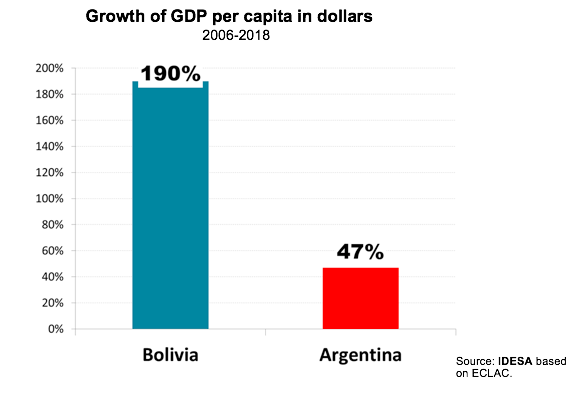 In a controversial and confusing circumstance, the former president of Bolivia, Evo Morales, resigned from his post, denounced a coup d’état, and went into exile in Mexico. The crisis, although with much more complex antecedents, was triggered in 2016 when Morales called for a referendum to modify the Constitution to permit his re-election. In that referendum, the “no” option won with a tight majority. Subsequently, and promoted by the former president himself, the electoral justice issued a ruling interpreting that under the current Constitution, re-election is possible.

For the elections, a difference of 10% was needed in order to avoid a second round. Even though the preliminary results did not show such a margin, Morales proclaimed himself reelected, which caused violent reactions. At the same time, the Organization of American States (OAS), which regularly acts as a watchdog in Latin American electoral processes, pointed out that the irregularities detected justified another voting with new electoral authorities. Faced with already furious acts of violence and a call from the security forces to step aside, Evo Morales declared himself the victim of a coup d’état.

This poor institutional performance contrasts with Bolivia’s economic performance. According to ECLAC, between 2016 (when Evo Morales assumes office) and 2018, it can be observed that:

These data show the outstanding management of the economic policy made by Evo Morales’s government. The differences with Argentina are overwhelming. The key difference is the fiscal order that allowed Bolivia to avoid the excess of monetary expansion and debt that generate so much damage in Argentina. Although Bolivia’s per capita income in dollars remains low, its economic growth was the highest in Latin America, helping for a substantial reduction in poverty.

In the superficial discussions that swarm in Argentina underlies the idea that the most powerful sectors of Bolivia promoted the crisis. The reason would be that they do not tolerate the “anti-neoliberal” economic policies of Evo Morales. These are typical thoughts of the last century, which collide with the evidence. In Bolivia, whatever the ideological motivations, the pillar of the outstanding economic results was fiscal discipline. Thus, a more objective evaluation leads to consider that the roots of Bolivia’s crisis are the Morales’s efforts for perpetuating in government and the difficulties in building a harmonious society.

To discuss whether or not it was a coup d’état is of little importance given the widespread and brutal violence. Instead of censor or vindicate the facts, it is better to highlight its economic lesson: fiscal order was the basis of a policy that vindicates socialism and indigenism.

In Latin America’s convulsions, there are features of immaturity but also advances.  Bolivia was able to grow economically and promote social inclusion but failed in building political institutions. Chile has combined stable economic institutions and well-functioning democracy but fell short to the aspirations of the lower-income population. Argentina has a robust democracy and a plural political system. However, it could not manage to overcome –as Chile and Bolivia did– the voluntarism and the lack of rationality in building economic institutions.