THE PROBLEM IS NOT THE DOLLAR, IT IS THE INFLATION

The rise of the dollar generates concern. However, as the experience of neighboring countries shows, it is natural and necessary for the dollar to rise when there is high inflation. The Central Bank will not be able to keep it tranquil, if the rest of the public sector does not lower public spending faster. END_OF_DOCUMENT_TOKEN_TO_BE_REPLACED 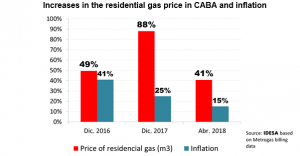 PRICE OF GAS HAS DOUBLED INFLATION

The updating of utility prices is as unpleasant as necessary. The alternative of printing money to pay for subsidies is socially more costly because it fuels inflation. One way to mitigate the negative impacts of the price correction is by lowering the spurious tax burden that makes the utilities more expensive.   END_OF_DOCUMENT_TOKEN_TO_BE_REPLACED

TO CONTINUE THE FALLING OF POVERTY, IT IS NECESSARY TO REDUCE INFLATION

INDEC reported that poverty is going down. To accelerate this process and make it sustainable inflation levels must keep on descending. Therefore, the priority should be to reduce public spending by eliminating national programs that overlap with local roles and not keep delaying the pension reform. END_OF_DOCUMENT_TOKEN_TO_BE_REPLACED

The upward revision of the inflation target is an act of honesty, but also of resignation. The speed of gradualism chosen to order public finances forces to tolerate higher inflation. It also implies that the vested interests of those resisting modernizing the state are imposed over the needs of the poorest who will continue to finance the fiscal imbalance with the inflationary tax. END_OF_DOCUMENT_TOKEN_TO_BE_REPLACED

Central Banck reserves are only 22% higher than in 2001

The Central Bank doubles 2001’s reserves in nominal terms, but once adjusted for price inflation in imports, they barely surpass the level they had when convertibility fell. The aggravating factor is that the import ratio (percentage of imports relative to the GDP) doubles the one that prevailed in 2001. This demonstrates that the currency crisis that Argentina is suffering now is severe, and demonstrates the need for a change in policy strategy.

END_OF_DOCUMENT_TOKEN_TO_BE_REPLACED 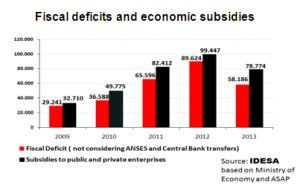 Fiscal deficit is explained by subsidies to companies

Through a norm thought to be used only in case of emergency –a decree of necessity and urgency– the government made ​​explicit that the public spending is growing out of control. The fiscal deficit is one of the main causes of inflation, which put pressure on the exchange rate. Even with some mitigating measures, such as the introduction of a multiple exchange rate system, the pending problem is still the high fiscal deficit. Since it´s no longer possible to increase the tax burden, the only solution is to reduce subsidies to public and private companies.

END_OF_DOCUMENT_TOKEN_TO_BE_REPLACED 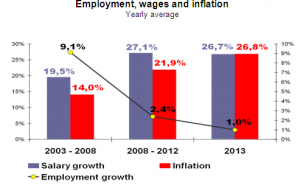