The claim of former president Cristina Kirchner to obtain two privileged retirements is not an exceptional case. Privileges and duplication of coverage are the rules, not the exception, in the Argentine pension system. Sustainability and equity demand a profound pension reform to bring rationality. With a presidential decree, the former president Cristina Kirchner was denied […] 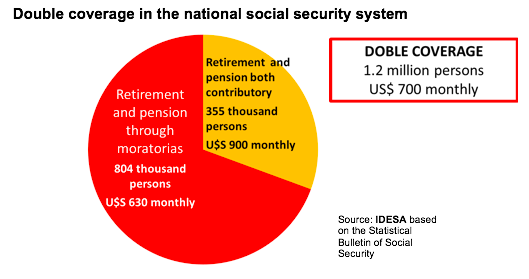 The ex-president can judicially question the decree that denies her the double benefit. If she gets a favorable verdict, with similar arguments she could apply for a third “lifetime allowance” since she was also a senator. Beyond the controversies that Cristina Kirchner’s attitude provokes, the case is not an exception but only a testimony of the irrationalities and inequities that underlie Argentina’s pension laws.

One way to show the massiveness of the distortions is to quantify the phenomenon of multiple pension coverage. Considering only the beneficiaries of ANSES, that is to say without adding provincial and municipal funds and special federal schemes such as security and defense, it appears that there are 5.6 million retirees and pensioners of whom:

These data show that 20% of national retirees have double coverage. This leads to their income being significantly higher than the minimum retirement (US$ 250 to June 2019). In terms of public spending, paying the second benefit generates additional disbursements equivalent to 1% of GDP. That is, the double pension coverage represents almost a third of the total imbalance of national public accounts.

If other federal, provincial, and municipal pension schemes are included in the analysis, it appears that the problems are fairly more widespread. For example, a case that also had high media resonance is that of a former judge from Tierra del Fuego who rejects the application of an extraordinary contribution on his benefit, to alleviate the deficit of the provincial pension fund. It is striking that among its arguments, he raises the “alimentary character” of the pension. The pension of this former judge is in the order of US$ 6,300 per month, that is, 30 times the extreme poverty line, the amount that the INDEC considers that a family needs to provide themselves with basic food. While 1.8 million Argentines are indigent, that is to say, they suffer from hunger, social security rules tolerate the appropriation of public funds by people with very high incomes.

The deep fiscal crisis and the irritating injustices impose the urgency to approach a professional and profound discussion about needed reforms to bring rationality and equity to the pension system. Assuming that the limit is not to violate past entitlements, it is vital to modify the rules for the future. This policy agenda should consider the elimination of privilege treatments (special pensions for politicians, magistrates, diplomats, and some workers’ segments), the unification of ages and contributions required for retirement, and the elimination of the possibility to accumulate more than one benefit. This will help financial sustainability and give social justice to the pension system by removing privileges and reinforcing the income of many older adults who remain in a vulnerable social condition.

The rules prevailing in advanced countries are very suggestive. In them, it is common to find homogeneity in retirement ages, the proportionality between the level of benefit and the contributions made during the working life and adjustment for life expectancy. No pension for survival is provided when the surviving partner has his own benefit or there is a limited and transitory amount until the person reorganizes his life after her couple’s death.