﻿ 9 out of 10 workers in poverty are not unionized - IDESA

9 out of 10 workers in poverty are not unionized

The rapprochement of church leaders to their trade union peers is uphold under the argument that they are united by concerns about the social situation. One tool they could contribute if they want to to reduce poverty is to allow SMEs to move away from centralized collective agreements and move to firm-level negotiations. Important authorities […] 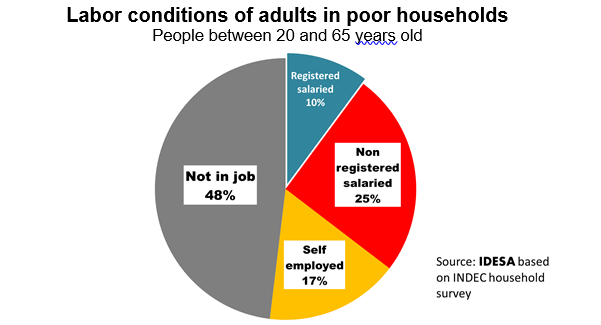 Important authorities of the Argentine Catholic Church showed a clear rapprochement with the traditional union leaders. The declared reasons are the common concern for the social impacts of the crisis. Within this framework, clergy and trade unionists gathered in the basilica of Lujan to explicit their coincidences.

The event coincided with legal accusations of corruption to trade union leaders. This generated a strong controversy due to interpretations that the church would be trying to condition judicial decisions. In this context, the preoccupation of Catholic leaders with the social situation and the logical aspiration to search for solutions through the protection of jobs were unnoticed. Leaving aside the judicial question, it seems natural that the rapprochement should be with those who legally represent the working class.

The question that remains is to what extent the people living in poverty are represented by trade unions. In order to address this issue, it could be useful to take a look to the INDEC household survey of the first quarter of 2018 on the employment situation of adult members among poor families. According to this source, in the population between the age of 20 and 65 years among the poor families it is observed that:

The low representation of trade unionism among the poor can be explained by the fact that Argentina has a dual labor market. On the one hand, half of the employed have a formal job, obtain better remunerations and are represented by trade unions. On the other hand, the other half of the employed operate in the informal sector and/or working on their own, receiving much lower, intermittent incomes without social security coverage. In other words, the fragmentation of the labor market is so deep that trade unionism represents only the elite of workers in formal employment. The rest of the workers are not represented because they work informally or on their own.

The fact that trade unions do not represent the poor does not mean that they do not have the power to do something to reduce poverty. Informality is highly concentrated among SMEs. Given the strong association between informality and poverty, working towards formalization is the best way to reduce poverty. One of the most distorting factors in labor relations is that centralized collective bargaining imposes wages and other working conditions according to the largest and most productive companies. Thus these collective bargaining agreements discriminate against small enterprises, inducing them to incur in informality. It would reflect a sincere concern for the social situation if the dialogue between the church and trade unions promote rules that would allow small firms to deviate from sectorial collective agreements and enter into firm level agreements between small employers and their workers.

The possibility for SMEs to move away from centralized collective agreements in order to negotiate labor rules adapted to their characteristics is a tool widely used in socially advanced countries, such as Germany. Church and trade unions could also make a contribution to social justice by promoting the income tax as a pillar for state financing rather than relying on regressive taxes, such as labor taxes.