Death of 4 to 6 children per day could be avoided

Under-five mortality in Argentina is higher than in Chile and Uruguay. The close to being approved by Congress “1,000 Days Plan” will not solve this deficiency. This Plan will deepen the chaotic overlapping of actions between the federal and the provincial jurisdiction. A public sector modernization is needed instead. 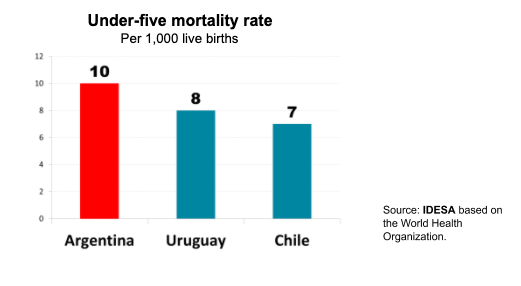 The government submitted the bill for the announced “1000 Days Plan” to the national Congress, which is getting ready to approve it. Under the name of “National Law of Attention and Integral Health Care during Pregnancy and Early Childhood”, it is proposed to create a new assistance benefit called “Integral Health Care Allocation”, the digitalization of birth certificates and a series of measures to be executed by the national Ministry of Health for the care of children, such as the provision of medicines, vaccines, milk, and food. The initiative is presented as a counterbalance to the bill to decriminalize abortion.

The federal arrangement in Argentina rules that the provinces hold all the competencies not expressly delegated to the federal level. In the area of public health, there is no competence delegation. On the contrary, the provinces reserve to themselves explicitly in their constitutions the responsibilities for public health. Therefore, the national Ministry of Health is a structure without direct competencies over the health system.

Notwithstanding the lack of competencies, the national Ministry of Health manages 15 federal programs in policy areas related to provincial competencies. The 2021 budget allocates AR$110 billion to these programs, of which $20 billion is for child care. In terms of outcomes, according to the World Health Organization, can be seen that

These data show that Argentina’s infant mortality rate is higher than in Uruguay and Chile, which are comparable countries given their income levels. Considering the number of births per year, if Argentina had an infant mortality rate similar to that of Uruguay, 1,400 deaths per year could be avoided, and if it were close to that of Chile, 2,000 child deaths per year could be avoided. This is equivalent to avoiding between 4 and 6 child deaths per day.

One of the reasons for this health failure is provided by a national Ministry of Health survey. This study shows that, in public hospitals, 37% of births are carried out without the essential obstetric and neonatal conditions. That is, some 23,500 deliveries per year are carried out in unsafe conditions. This is clear evidence that the provinces’ health systems present many deficiencies and that the national Ministry of Health programs do not correct them. On the contrary, the overlapping functions generate public resources squandering and responsibilities dilutions. On this background, it is surprising that the “1000 Days Plan” proposes to deepen jurisdictions’ functions overlapping.

Concerning the identification of births, the “1000 Day Plan” makes a similar error. The civil registry management is decentralized in the municipalities under the regulation of the provinces and the federal government. It is true that the system works poorly and that this generates a high incidence of persons without documentation. But the problem will not be solved by setting up a parallel registration structure as proposed in the “Plan de los 1,000 días”. This proposal, like the national programs of the Ministry of Health, is a political advertisement. The civil registry service will not be improved by overlapping actions but by more efficient management.

Another purpose of the “1000 Days Plan” is the creation of the “Comprehensive Health Care Allowance,” which is defined as an annual stipend conditioned on compliance with medical checks and vaccinations. It is the same condition defined in the Universal Allowance per Child (AUH), which does not work at all due to the primitive mechanisms used by the ANSES to control the conditionalities. As with public health and civil registration, the solution for children health checks is not to create a new allowance overlapped with the AUH, but to modernize to get more efficient management in the ANSES.