DOLLAR RISES BECAUSE LOW PRODUCTIVITY NOT DUE TO THE CENTRAL BANK

The devaluation put an end to the artificial increase in the purchasing power in terms of dollars caused by the financing of the fiscal deficit with external debt. To generate sustainable improvements of income in term of dollars, there is no need of better Central Bank presidents but genuine increases in productivity. The dollar had […] 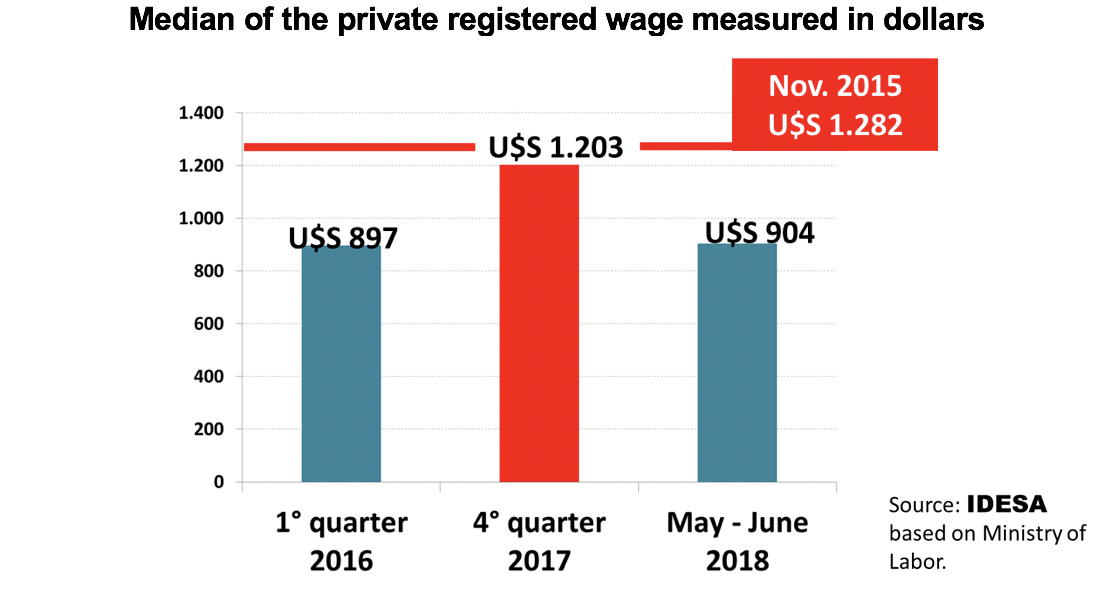 The dollar had a new surge accumulating a 60% compared to December 2017. The exchange rate instability led to the displacement of the president of the Central Bank.It is a bit contradictory that within hours of having emphatically established in the agreement with the IMF the commitment with independence of the Central Bank, the head of the institution is removed and replaced by who had been occupying the Ministry of Finance.

Can the change of the president of the Central Bank bring stability to the dollar?To shed some light on the answer, it may be useful to look at an indicator whose behavior helps to understand the root of the financial turbulence, that is, the wage measured in dollars. When the wage measured in foreign currency lags behind local productivity levels, there are upward pressures on the price of the dollar that tend to correct the lag.

In November 2015, before the current government assumed, the wage in dollars was US$ 1,280. This level was not sustainable evidenced by the fact that, even with the “exchange rate trap” (prohibition to buy dollars at the official exchange rate), the government was forced to sell dollars in the futures market. Since then, the wage measured in dollars had the following evolution:

These data show that, at the beginning of the current government, the artificial wage level measured in dollars was adjusted to more sustainable level. But from that moment until the end of last year the wage measured in dollars rose again to levels similar to those of the end of 2015. As such increase (more than 30%) was not accompanied by improvements of similar magnitude in productivity, exporting became increasingly difficult and importing became more profitable. Nowadays the devaluation comes to impose a new adjustment to the high salary in dollars tending to correct the external imbalance.

The fiscal deficit financed with external debt is what causes the imbalance of the external sector. This is explained by the fact that the abundance of foreign currency brought by the external debt, to which the government appealed to cover the fiscal deficit, resulted in an appreciation of the exchange rate leading to the surge of the salaries measured in dollars. As it was not accompanied by increases in labor productivity of similar magnitudes, the result was a vertiginous increase of imports and trips abroad in parallel with the deterioration of export capacity, including receptive tourism.

In this context,the strong devaluations that occurred in recent weeks are not the result of decisions taken by the Central Bank. These are the reactions generated by the perception that the strategy of gradually correcting the fiscal deficit with external debt is not sustainable. It is a structural problem about which the new central bank authorities can do little. In the best case, they can temper the turbulence transitorily, but there is no financial alchemy that avoids the pressures tending to adjust the purchasing power of the salaries to the meager productive performance of Argentina.

The agenda to improve productivity is varied and complex, but it starts by reducing the fiscal deficit. This will avoid the exchange rate appreciation caused by the entrance of dollars due to greater external debt and it will provide the fiscal space to reduce distorting taxes and generate conditions for the productive sector to access credit under conditions similar to those in the rest of the world. In parallel, it is fundamental to professionalize the structures of the state so that companies and citizens could receive higher quality public services and thus may be able to raise their productivity.