﻿ Instead of abandon it, the fiscal consensus should be deepened - IDESA

Instead of abandon it, the fiscal consensus should be deepened

The government announcements to alleviate the crisis include re-freezing utility prices. Thus, a pillar in the goal of reducing public spending and eliminating inequities is canceled. Instead of regressing in such a strategic issue, such as utility prices, a deepening of the Fiscal Consensus should be worked. The national government made a series of announcements […] 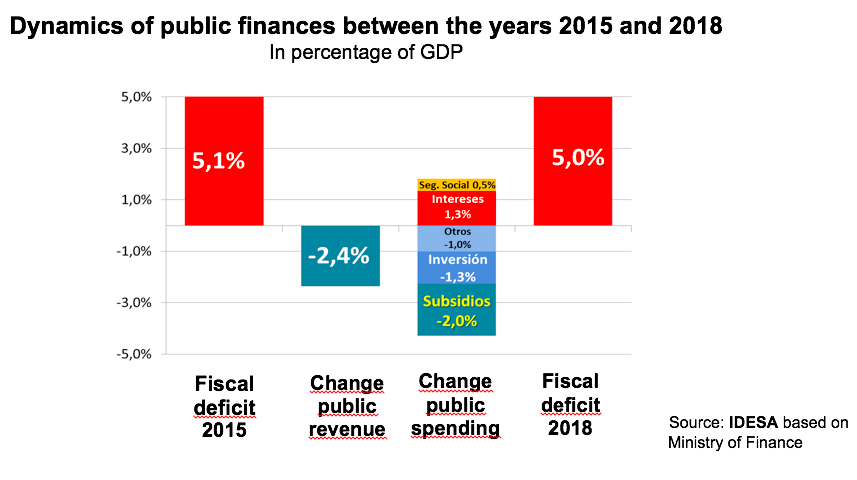 The national government made a series of announcements aimed at reducing the effects of inflation and high interest rates on consumption and the productive sector. The measures include price freezing in some foods, subsidized credit for consumption for beneficiaries of welfare and payment plans for fiscal debts. In the best of cases, they are mere palliatives regarding the depth and the persistence of the crisis.

In any case, the most important official statement refers to utility prices. The federal government will absorb the two increases previously announced for 2019 in the residential electricity tariff and there will be no increases in metropolitan buses and trains tickets, and national road tolls in the rest of the year. The government highlighted that the freezing only applies to tariffs regulated by the federal authorities, inviting the provinces and municipalities to imitate the initiative in their jurisdictions.

The relevance of the decision to re-manipulate utility prices can be assessed analyzing the dynamics of federal finances in recent years. According to the Ministry of Finance, in both 2015 and 2018 years, the fiscal deficit of the federal government was 5% of GDP. That is, the level of fiscal deficit remains the same. However, there were changes within the public finances in the following magnitudes:

These data show that a significant fiscal effort was made by lowering revenues (in part, to return resources to the provinces) and reducing different items of public spending. Two worrying aspects are an increase in pension spending and an exponential growth of interest because the fiscal imbalances are being covered with debt. However, it is remarkable that the reduction of subsidies for electricity, gas, water and transportation contributed almost by half in the spending reduction. Even so, it is at a halfway since the utility subsidies dropped from 4.2% to 2.2% of the GDP between 2015 and 2018.

Reassigning federal funds to freeze utility prices implies a violation of the spirit of the Fiscal Consensus, promoted by the federal government itself to normalize relations between the federal level and the provinces. This agreement provided for the return of 15% of the tax co-participation to all provinces and a special fund (Fondo de Conurbano) to the Province of Buenos Aires. In parallel, it stipulated that the federal government must stop subsidizing electricity as of 2019 and urban transport from 2021 corresponding to the Metropolitan Area of ​​Buenos Aires (AMBA). With the new announcements, the use of federal funds to benefit the metropolitan region returns.

The alternative is to attack the crisis by deepening and broadening the Fiscal Consensus. The return of resources to the provinces should be accompanied by the transfer of responsibilities that should never have been assumed by the federal level. The key point is that the federal level must definitively stop regulating and financing utilities in the City and the province of Buenos Aires. It would also help to lower public spending and increase its efficiency, the elimination of the national programs that overlap with provincial and municipal responsibilities. Another central issue is to address jointly between the federal level and the provinces (at least those that did not transfer their pension schemes) the pension reform.

The best antidote to the crisis is to take speed, not to backtrack, in the direction proposed in the Fiscal Consensus. This is what will help more rapidly and integrally to fix public finances. Otherwise, the current rate of growth of the public debt due to the persistence of the fiscal deficit will prolong the increase in interest payment which will erode all the efforts the federal government can make to continue lowering public spending.