﻿ Macri made "A Bridge to Employment" and it failed - IDESA

Macri made “A Bridge to Employment” and it failed

For the last 30 years, temporary reductions in labor costs have been applied to encourage employment. In the 90’s they were called “promoted modalities”, in the previous government “Empalme” and now “A Bridge to Employment”. As long as labor institutions are not modernized, failure is guaranteed. 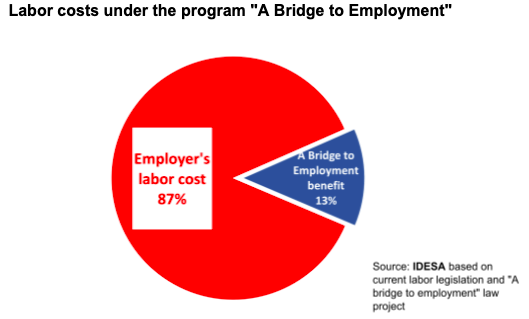 The government presented the program “Un Puente al Empleo” (A Bridge to Employment) to convert welfare into decent jobs. It is announced as a 100% exemption from employer contributions for 2 years plus the possibility of taking the welfare’s amount as part of the salary for 1 year. However, the text of the bill specifies that the discount is only on employer’s contributions to the pension system –costs of family allowances, unemployment, social security, labor risk and union charges are excluded– and is capped at 2 minimum wages. In addition, it must imply an increase in the number of employees, it is not allowed to have unregistered employees, and the company must be up to date with the payment of social security contributions.

The most recent antecedent of this program is the “Empalme” plan of 2017. The objectives and design are similar. The main difference is that it allowed taking 2 years of welfare as part of the salary, but in the opposite direction, it did not contemplate exemptions on employer contributions. This initiative of the Macri’s government was a failure.

Will “A Bridge to Employment” be able to achieve better results? Assuming an employer who takes on a welfare beneficiary for 2 years (the duration of the exemption) at a salary of 2 minimum wages ($64,000). The situation would be as follows:

These data show that employing a welfare beneficiary reduces labor costs by 13%. This calculation only includes the direct monetary cost of the employment relationship. It does not take into consideration the costs of learning, adaptation to the workplace, bureaucratic procedures, and possible labor conflicts or lawsuits. Given that the beneficiaries of welfare have low levels of education and lack relevant work experience, it is highly probable that the government’s program will fail like Macri’s “Empalme”.

The program, in addition to being voluntarist, uses a sensitive phrase (turning welfare into jobs) to continue transferring public resources to the piqueteros’ organizations. Article 5° of the bill establishes that in order to use 1 year of welfare as part of the salary the beneficiary has to participate in training and education courses provided by these organizations. This is the standard method used to transfer public resources to the piqueteros. This diversion of public funds to piqueteros’ organizations overlooks the fact that, as international best practices show, the best setting for job-oriented training is the company.

For the last 30 years, attempts to stimulate formal employment by offering temporary reductions in non-wage labor costs prevail. Since the “promoted modalities” set in the National Employment Law of 1991, the names have changed, but not the substance and the failures. The reason is that, with macroeconomic instability and highly distorting labor institutions, a transitory reduction in labor costs is an irrelevant incentive for employers, especially when it comes to people with low skills as welfare beneficiaries are.

The evidence accumulated over three decades shows that this type of program will not succeed in converting welfare into jobs. On the contrary, its “success” will be in keeping transferring public resources to the piqueteros‘ organizations. For this reason, it is essential to put this objective clear in the parliamentary debate. If the goal is to reduce poverty, labor institutions must be modernized to reduce non-wage costs and the judicial risk of hiring a worker.