﻿ Tax pressure has doubled, but poverty did not decrease - IDESA ﻿

Tax pressure has doubled, but poverty did not decrease

The sharp increase in taxes was justified in the solidarity the affluent must keep with the destitute. This is valid reasoning, but not for Argentina, which already has a very high tax burden. In order to reduce poverty, it is not necessary to increase taxes but to achieve better state management. The official argument to […] 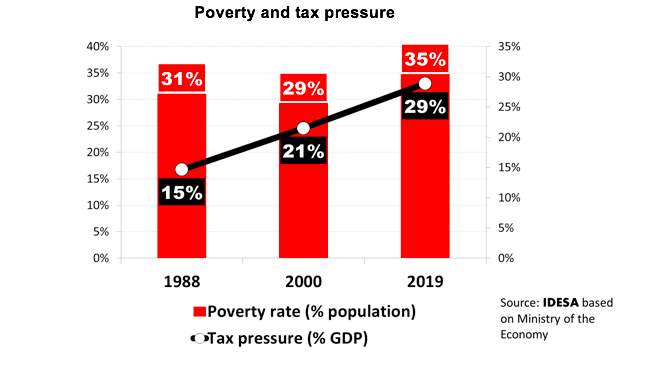 The official argument to justify the tax increase is that the rich should be in solidarity with the poor. An extreme approach to this argument was taken by the leaders of the social organizations (piqueteros) that publicly complained to the governor of the Buenos Aires province because they consider his tax project is too moderate in taxing the wealthiest. It is not a minor detail that some of these leaders are officials in the national government.

The logic of increasing tax pressure to reduce poverty is that the state takes resources to redistribute them among low-income families. This can be done through cash transfers to vulnerable sectors and/or through social infrastructure with free access so that low-income families can get an education, good jobs, and thus progress by their own means.

What was the relationship in Argentina between tax pressure and poverty over time? To find out the answer, information published by the Ministry of Economy and the INDEC over the last 30 years may help. According to these sources, it can be seen that:

These data show that, over the last 30 years, the rapid increase in the tax burden did not prevent poverty from worsening. By the end of the 1980s, almost a third of the population was living in poverty. With ups and downs, poverty increased, although the appropriation of resources by the state, through the tax system, doubled.

The argument to justify tax increases for redistributive reasons may be valid when the tax burden is very low. This is the case in many countries, including Latin America. But not in Argentina, which has a higher tax burden than, for example, Korea, Switzerland, the United States, and Ireland, and not far from the average of the advanced countries (OECD). Besides, Argentina has a very high rate of tax evasion. This implies that taxpayers who pay taxes suffer a higher than average tax pressure to compensate for the non-payment of taxpayers who evade or avoid taxes.

While poverty has many causes, a key determinant is the misuse of public resources. Spending growth at all three levels of government was as rapid as the tax burden increase. However, most of these resources, including social spending, did not benefit the poorest. One example of this is the sharp expansion of pension expenditure, which benefits mostly the middle- and high-income sectors. On the other hand, the population in general –but especially the poorer– suffer the consequences of the discouragement of formal employment, investments, and exports generated by the highly distorting taxes to finance the increase in public expending.

Poverty is not reduced by increasing taxes but by better state management. One central point is to tax ordering to unify those applied by the three levels of government and thus give viability to the objective of lowering taxes rates without losing tax collection. Another point is to order the pensions system to give further equity and sustainability, given pension take the bigger share of public expenditure. Finally, the functional ordering, to ensure that the three levels of government do not overlap in the public policies they implement.