﻿ The federal government pays only 7% of the teachers’ salary - IDESA ﻿

The federal government pays only 7% of the teachers’ salary

The governor of Chubut laid some of the blame for the teachers’ strike in his province on the federal Secretary of Education allegedly for not sending him funds. This shows how federal interventions in services in charge of the provinces do not provide solutions, but excuses to elude responsibilities from their own failures. The province […] 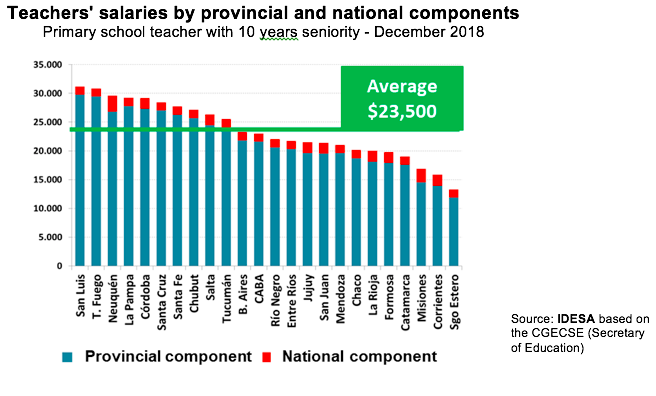 The province of Chubut is in a deep crisis because the provincial state went into default. For two months, there have been problems in paying salaries to employees of public bodies, hospitals, and teachers. The strike in state schools is entering its tenth week, which means that children and young people of Chubut have not attended classes for two and a half months.

The origin of Chubut’s fiscal crisis goes back several years. However, it was triggered when the current governor, having been re-elected, failed to comply with campaign promises to give high wage increases. To unlock the teachers’ strike, the governor asked the federal government for help in paying part of the teachers’ salaries. From that request, there were cross accusations between provincial and federal officials. This prompted the governor to place the blame for Chubut’s education crisis on the national authorities.

Is the federal Secretary of Education responsible for the Chubut teachers’ strike? Shedding light on the answer requires to observe how teachers’ salaries are financed in Argentina. Taking as a reference to the salary of a teacher with 10 years of seniority, as of December 2018 (last available) it is observed that:

These data show that teachers’ salaries are the responsibility of the provinces. The “aid” that the federal government gives to the provinces is tiny. It is so meager that it can hardly solve teachers strike. In other words, responsibility for managing Chubut’s budget, including those allocated to education, rests with the governor. But the federal Secretary of Education becomes responsible when they meddle in an area that is not within their competence, contributing to dilute responsibilities in the crisis.

Article 5th of the National Constitution expressly states that the provinces reserve “…the administration of justice, its municipal system, and primary education”. This was the political will when the Constitution was written in 1853 and remained in force in 1994, when it was reformed. These definitions leave no doubt that the provinces are responsible for primary education.

That the federal government interferes in provincial functions is an institutional deviation with costly implications. For example, 7% of the salary paid by the federal level is materialized through 3 programs: the Teaching Incentive Fund ($1,210), the Didactic Materials ($210), and the National Contribution ($473) that is sent only to 7 northern provinces. Thus, the scheme multiplies bureaucracy and helps the person responsible for the problem –in this case, the governor of Chubut– to dilute their responsibilities. Nor do federal interventions serve to “mitigate regional differences”, as advocates of these programs argue. There are provinces where the primary school teacher salary remains at AR$30,000 (like San Luis, La Pampa or Córdoba), in Chubut it is AR$23,000 and in others salary is only AR$15,000 (like Misiones, Corrientes and Santiago del Estero).

The best thing that the federal government can do for education is to decentralize these resources and dismantle the rest of the national programs. Not only those that finance salaries, but also those destined for “Infrastructure and Equipment”, “Teacher Training Actions”, ” Strengthening of Kindergartens Buildings”, etc. It is no coincidence that Canada, a federal country with one of the best education systems in the world, does not have a national Ministry of Education.