﻿ The income tax should not be changed - IDESA

The income tax should not be changed

The government and the opposition are reportedly agreeing to reduce the incidence of the income tax. Meanwhile, taxes that punish the most underprivileged are maintained. Having such an unfocused and opportunistic agenda is a guarantee of deepening economic and social decline. 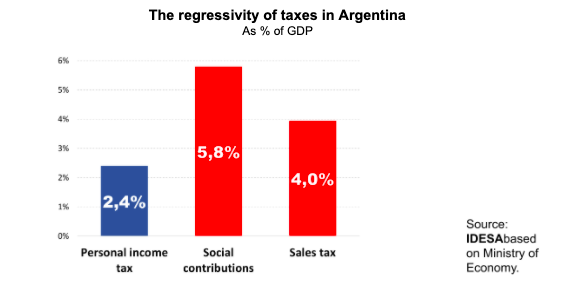 The Lower House’s president promotes a law to exempt or reduce income tax for wage earners with salaries between AR$ 75,000 (the current tax floor) and AR$ 150,000. This generates major distortions because it widens the gap with those earning higher salaries  and self-employed (who will be taxed as they are today). To avoid the political cost of rejecting this proposal, the opposition asks to extend the exemption to those excluded in order to mitigate the distortions.

The tax change that the government and the opposition are agreeing on would imply a higher fiscal cost. This adds another loss of confidence in the possibility of meeting the inflation target set by the government for 2021. Moreover, as the income tax is co-participated, the provinces will surely demand compensation.

Officialism and opposition share the aspiration that fewer people pay income tax. What may be the basis for this aspiration? By way of reference, the international experience may help. According to the OECD, in developed countries, personal income tax collects approximately 10% of GDP. According to the Argentine Ministry of Economy, the following picture emerges in the country:

These data show that personal income tax collection in Argentina is very low. This low level is compensated, for example, by social contributions (which affect the lowest salaries) and sales tax (which has a high impact on low-income people’s consumption). These two taxes collect four times more than the income tax. This exposes that the ruling party and the opposition initiative is based on opportunism focused on electorally relevant segments with high purchasing power. In other words, progressivism is for speeches. Decisions go in the opposite direction: the incidence of progressive taxes (income tax) is reduced, while regressive taxes (social contributions and sales tax) are maintained.

The middle class and trade union leaders’ resistance against the income tax is based on the argument that 20 years ago few people were reached by it. Since then, high inflation and the lack or partial updating of the tax parameters meant more people were reached by it. It was a spontaneous and sloppy way of increasing the tax pressure. This justifies revising the rules, but does not make it a priority or an urgent issue. The objective should not be to lower the incidence of the income tax but, on the contrary, to improve its design in the belief that it is the socially fairest way to finance the state.

The ruling party and the opposition should focus on implementing a comprehensive reorganization of the tax system. Simplification based on the unification of taxes is key. As has been done successfully with the Monotributo, unifying consumption taxes (federal VAT, provincial sales tax and municipal levies) can reduce the administrative and tax pressure on taxpayers. The same strategy needs to be applied to wealth taxes (personal property, real estate and vehicle taxes). This should be complemented with minimum non-taxable social security contributions (so that people with lower incomes get chances of getting salaried jobs in the formal sector) and reducing the tax on checks and export taxes.

Promoting the reduction of the income tax, vowing commitment to social justice, is an extreme act of hypocrisy. In order to generate a tax system that promotes social development with equality, a comprehensive reform is needed to simplify, reduce the most unfair and distorting taxes, and to eliminate the most destructive one: inflation.