The pandemic is not the worst that happened to the education

The opening or closing of schools because of the pandemic has justified arguments on both sides. On the other hand, where the evidence is striking is in the profound decay of the education system. Therefore, it is necessary to discuss less what to do with education in the pandemic and more on how to reverse the decline. 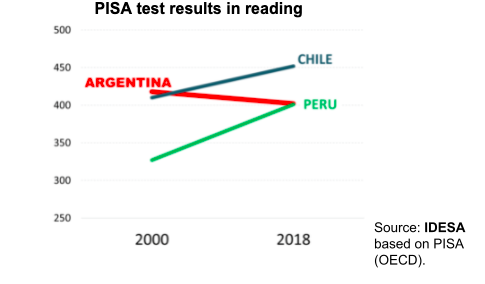 In the conflict between the national government and the City of Buenos Aires over the closing or opening of schools, there are opposing opinions. On the one hand, the position of those who argue that the priority is education and therefore push for the schools to remain open. On the other hand, those concerned about the second wave of contagions consider that it is necessary to extreme the prevention, including the schools closing. There is so much uncertainty surrounding the pandemic that both opinions have merits. Therefore, instead of escalating the conflict to the level of the Court, it would be more advisable to appeal to dialogue and tolerance in facing this difficult situation.

The conflict would not have this intensity if last year such long and rigid confinement had not been implemented, which led to the whole school year loss. In any case, at some point science will control the virus. The question is whether Argentina, with the virus under control, will recover education.

The PISA test that measures the countries’ educational quality may help. This is an evaluation of 15-year-olds to measure their reading abilities. In the South American region, the following is observed:

These data show that the degradation of education in Argentina comes from long before the pandemic. According to the PISA test organizers, a difference of 40 points is equivalent to approximately one year of studies. This means that, compared with Chile, Argentine students reach the age of 15 with one year less of learning. In other words, the loss of learning for keeping the schools closed for a year, due to the pandemic, is not greater than the losses the educational system already had due to its malfunctioning. This should not be taken as an argument in favor of closing schools during the pandemic. It demonstrates that in Argentina the educational problems are much more serious, structural, and historical.

It seems that seeing schools closed for so long made people aware of the problem. But schools, especially those serving the poor, have been closed for a long time. A study published in the Journal of Labor Economics by two foreign authors called “The long-run effects of teacher strikes: evidence from Argentina” points out that teacher strikes would cause students, as adults, to have fewer jobs and lower wages. Controversial as these results may be, the hard fact of this study is that it counted 1,500 teacher strikes in Argentina since the return to democracy until 2014. The authors chose Argentina for the study because it is difficult to find another country where students have suffered so many strikes.

Teacher strikes are one of the factors, but not the only one that explains the decline. Another one is the human resource management deficiencies. The ancient and atavistic teaching statutes allow and promote bad practices such as absenteeism, lack of commitment, poor or no training at all, and old teaching methods. But fundamentally, they punish teachers who strive for the learning of their students by denying them good salaries. Thus, in Argentina’s provinces, there are on average 2 primary school teaching positions for every 25 students, but the classrooms are overcrowded and the teachers who do work are underpaid.

The uncertainty surrounding the pandemic makes it advisable to be flexible and tolerant about how to balance educational and health priorities. Much less debatable is the deep and long decline of the educational system. In this subject, there are more certainties where it would be good for those who claim to defend education to address them seriously.