The poor are those who receive least income from the state

The available evidence does not support the claim that the poor live on tax-financed state transfers paid by the middle class. The reason is that the public sector manages an enormous mass of public resources in a disorderly and arbitrary manner that, in its major part, does not benefit the poor.   INDEC published information on […] 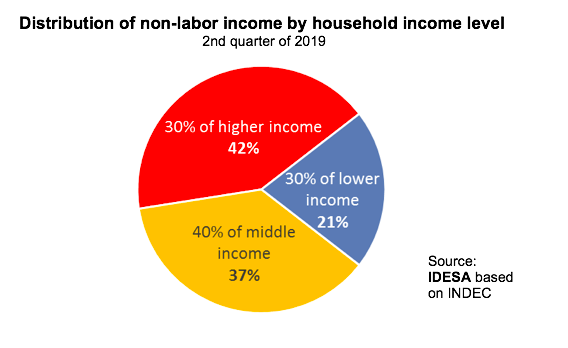 INDEC published information on income distribution among urban households as of the 2nd quarter of 2019. An interesting aspect is that it disaggregates the sources of family income. On the one hand, it measures labor income. On the other hand, it measures the non-labor incomes that combine state transfers (mainly pensions and, to a lesser extent, welfare transfers) and private transfers (such as rents or income quotas for divorcees, among others). Because of its magnitudes, most non-labor incomes are transfers from the state.

The data displayed in this way would suggest that the poor live on the transfers they receive from taxes paid by the middle class. However, disaggregating total non-labor income (which, as said, is strongly determined by state transfers) among socioeconomic segments, it appears that:

These data show that, although poor households are more dependent on non-labor income, they are not the ones who receive the most resources by this source. From the total amount of non-labor income that families receive, only one-fifth goes to low-income households, while twice that proportion goes to high-income households. Though this is an approximation, it suggests that most state transfers do not go in favor of poor families.

The main component of state transfers, and therefore of non-labor income, are pensions. Within pension expenditure, a big part is generated by the special retirement regimes (the so-called “privilege regimes”) that pay much higher benefits than the general regime. Another big share is generated by the overlapping of pensions for retirement with survivor pensions. These public funds go mainly in favor of the middle and upper socioeconomic classes. On the other hand, welfare transfers, which mostly focus on a more vulnerable population, are of low magnitudes in comparison with pension expenditure.

This income redistribution in favor of the well-off draws the importance of a public sector better organization. Given the size of the resources involved, it is essential to organize the pension system. This includes reviewing special regimes and double coverage. In order to fix the rest of public spending, it is necessary to eliminate federal programs that overlap with provincial responsibilities. In this sense, one of the areas where improvement could be most significant is in public social spending. The organization of the tax system is also crucial. Here it is necessary to merge taxes and collect more via patrimonial taxes, income, and VAT. For poor people, VAT should be refunded when debit cards pay purchases. With these structural reforms, macroeconomic stability could be easier to achieve, the absence of which today is the main factor generating poverty.