The federal government decided to intervene again in the negotiation of teachers’ salaries. The main consequences of this interference are increasing labor conflicts, and teacher strikes since teachers are employed by the provinces. Therefore, they are the ones responsible for paying the teachers’ salaries. The “Paritaria Docente” is the wage negotiation in the collective bargaining […] 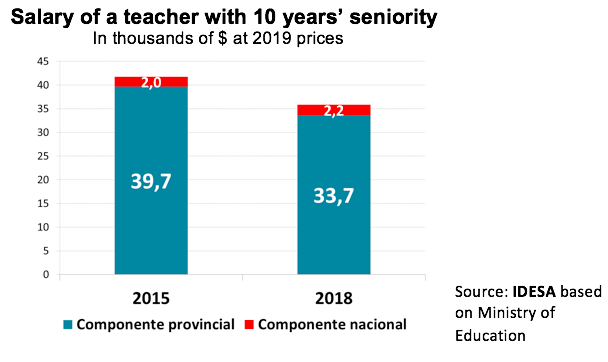 The “Paritaria Docente” is the wage negotiation in the collective bargaining between the Ministry of Education and national teachers’ unions. From 2007 to 2017, this Paritaria had the power to negotiate working conditions and a national minimum teacher salary. The past government, in 2018, established that the discussion of teachers’ salaries is not a matter of this Paritaria and that the national minimum teacher’s salary will be the general minimum legal wage plus 20%.

According to article 5 of the National Constitution, basic education is the responsibility of the provinces. Therefore, teachers are provincial civil servants, and the provinces are responsible for paying their salaries. Because of the inconsistency established in 2007–that the federal government negotiates the salaries that the provinces have to pay–, a palliative mechanism was implemented in which the federal government provides some “help” to fund part of the teachers’ salaries.

Unfortunately, the latest data on teachers’ salaries published by the national Ministry of Education correspond to 2018. But taking this information and updating it to current prices, it can be seen that:

These data show, on the one hand, that the “help” the federal government gives to the provinces to pay teachers’ salaries is very small. Less than $1 out of  $10 teachers receive is paid by the federal government. On the other hand, the decrease in teachers’ income is explained by the provincial component, since the national one did not lose against inflation. It is very suggestive that already in 2018, when the current crisis was starting, the provinces could no longer maintain the real level of teachers’ salaries in the context of high and growing inflation.

Restoring the power of the Ministry of Education and the national teachers’ unions to negotiate teachers’ salaries could not be more detrimental to education. In the provinces, it is an additional factor of destabilization of public finances since teachers’ salaries are the main component of provincial public spending. Moreover, they serve as a reference for the rest of the public wages at the provincial level. At the federal level, it is also a destabilizing factor because centralized intervention legitimizes the provinces to put pressure on the federal government to take charge of the consequences of its decisions. This is clearly not viable because the federal level pays a minuscule portion of teachers’ salaries, and its fiscal situation is even more fragile than that of most provinces.

The Constitution sets clearly that basic education is the provinces’ responsibility. However, the federal government not only “helps” to pay a minuscule portion of salaries but also implements other national programs such as “Infrastructure and Equipment” for schools, “Teacher Training Actions”, “Building Strengthening Kindergartens”, among others. This serves to justify bureaucracy at the federal level, but not to improve education since its impact is very marginal regarding the magnitude of the needs. Furthermore, it generates perverse incentives among provincial administrators since they find in this interference the opportunity to disengage themselves from their responsibilities.

It is naive to justify these national programs because they compensate for regional asymmetries. In a federal system, this leveling function corresponds to federal co-participation. This is why the poorer provinces receive proportionally many more resources than the richer ones. Keeping the federal interferences in provincial duties is the best way to deepen the degradation of the education system.