﻿ IMF fiscal target is met with accounting make - up - IDESA

IMF fiscal target is met with accounting make – up

The public accounts reported by the government state that the targets agreed with the IMF are met. But this was achieved thanks to an accounting gimmick that allows recording an unusual increase in extraordinary revenues. The maneuver seeks to conceal the explosive dynamics of energy subsidies. 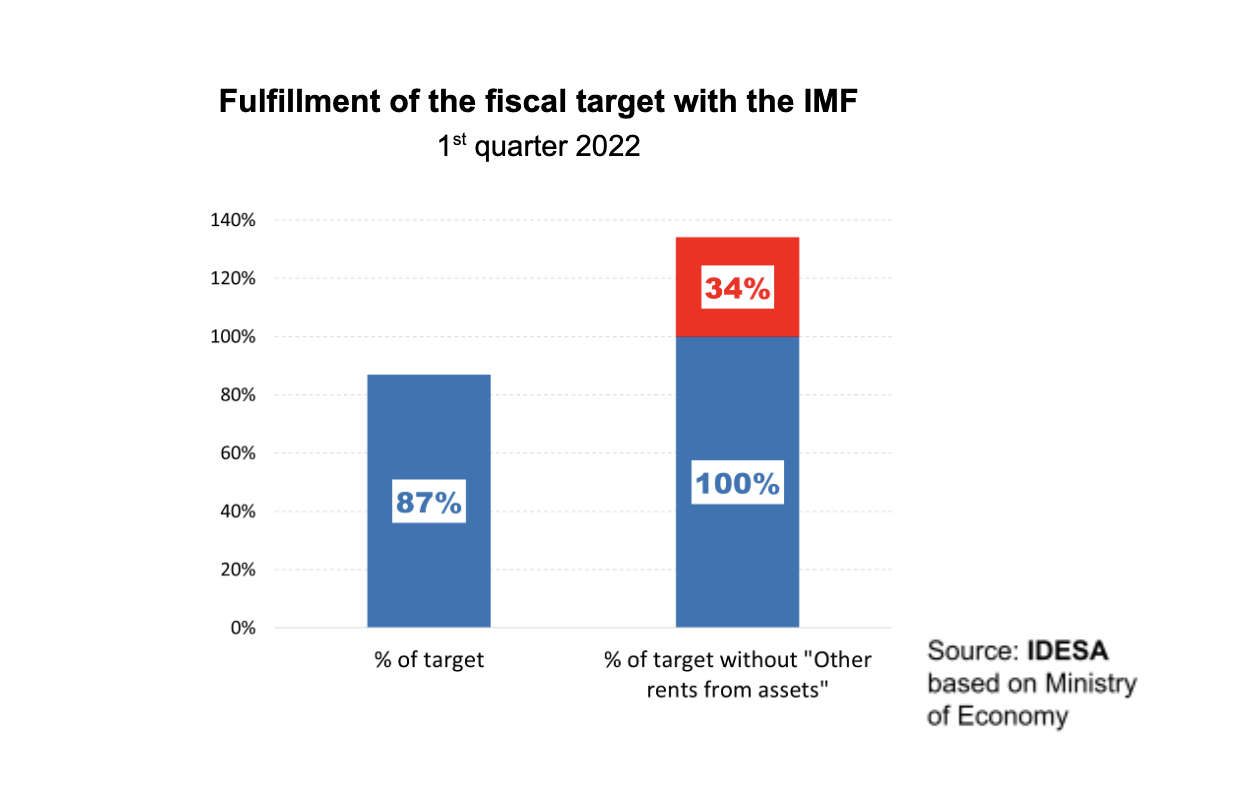 In the agreement with the IMF, Argentina committed to comply with a series of measures, the most important of which are the reduction of the primary fiscal deficit and of the monetary issuance to finance the Treasury. To this end, targets were agreed to be monitored by the IMF on a quarterly basis. In order to contribute to transparency and social control, compliance with both goals can be easily monitored on a monthly basis on IDESA’s website (https://fmi.idesa.org/).

Currently, IMF technicians are evaluating the first quarter of 2022. The agreement states that the primary fiscal deficit should not exceed $222 billion and the monetary issuance $237 billion in the first quarter of the year. According to the data published by the Ministry of Economy and the Central Bank, the primary fiscal deficit would have been 87% and the monetary issue 52% of these goals. Evaluated from a strictly accounting perspective, there is comfortable compliance with the targets.

Notwithstanding the fact that this will make it possible to overcome the IMF monitoring, a more disaggregated analysis is relevant. According to the official information published, it can be seen that:

These data show that the fiscal target has been met thanks to extraordinary revenues. If this component was excluded, the IMF’s assessment of the first quarter of the agreement’s execution would be negative. In other words, from the accounting point of view, there would be compliance. However, if the analysis goes beyond the formalisms of public accounting, there are doubts about the genuineness of fiscal imbalance compliance. It does not help to dispel suspicions that the Ministry of Economy did not express any opinion on these extraordinary revenues.

The explanation is that the difference between the nominal value of the bonds issued by the Ministry of Economy and the price at which it actually places them is computed as current revenues. The point is that a debt bond is worth more than its nominal value when its yield is higher than the market yield. For example, the market interest rate is 50% and the State promises to sell a bond for $100 and pay at maturity $160. Such a bond has a market value of $107 because this amount at 50% interest yields $160. The government computes those $7 as current income.  According to press reports, the Ministry of Economy stated that this registration is usual. The point is that usually ” Other rents from assets” represented 2% of total income, while in March 2022 it represented 12%. The practice may be usual, but the intensity with which it was used in March is unusual.

Thanks to this particular way of accounting for revenues, it was possible to offset the impressive increase in energy subsidies. In the first quarter of 2022, these subsidies had an increase of 180% compared to the same period of the previous year. These expenses had been increasing at a rate of 85% in January and February and in March they jumped to 350%. The war in Ukraine would explain part of the increase, but even before the war, spending on energy subsidies had been rising well above inflation (55%) and tax revenues (58%). This confirms the explosive dynamics of energy subsidies.

Compliance with the IMF does not guarantee consistency in domestic policies. In the first quarter, it was enough to raise public debt yields above market interest rates to inflate current revenues. In the long run, this will not prevent people from paying higher electricity and gas rates.