﻿ By reforming the public sector, devaluation can be avoided - IDESA

By reforming the public sector, devaluation can be avoided

The primary source of pressure on the official dollar is the excess of money printing. Therefore, the government decided to stop the issuance by switching to debt financing temporarily. This is an effective strategy for the short term. However, to avoid a costly devaluation, a comprehensive State reform is needed. 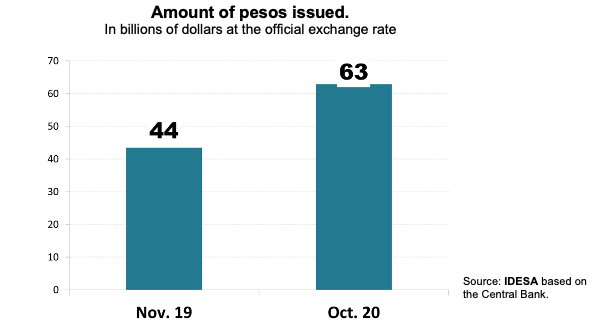 The government changed its strategy to deal with the exchange rate instability. The National Treasury issued public bonds in pesos to finance its deficit instead of borrowed money from the Central Bank. The new bond has the particularity that it updates the capital according to the official dollar rate. The aim is to give an option to those who fear an abrupt devaluation to invest in pesos being protected against it.

The strategy delivered the expected results. Instead of buying dollars on the black market, some investors chose to invest their savings in the national Treasury securities. This led to a shift in the price of the black market dollar. From the dizzying growth in recent weeks, when it reached $185, there was a significant reduction to $165 per dollar. It is a relief in the black market exchange rate volatility, although the gap with the official exchange rate remains high (in the order of 100%).

The question now is how long this peace will last. The answers can be found by looking at the evolution of monetary emission and the official exchange rate since the current government took office. According to data from the Central Bank, it can be seen that:

These data show that since the present government took office, monetary emission has grown much more than the official exchange rate. The issuance was so rampant that to restore the precarious situation that prevailed before the current government took office, it would be necessary to bring the official dollar up to $113. Avoiding this traumatic devaluation in the official exchange rate led the authorities to tighten the exchange controls, hinder imports, and now issue debt to flatten the monetary expansion. However, these are measures that contain the demand for dollars, but only in the short term.

Exchange rate instability derives from the monetary expansion, which is driven by the fiscal deficit. In the 10 months to 2020, the primary fiscal deficit was AR$1.3 trillion. The loss of reserves and the jump in the black market dollar made it clear that it is not sustainable to finance such an imbalance with monetary issuing. That is why the government had to resort to borrowing in order to finance its deficit. It is a consistent strategy but limited in time since there are also limits to borrowing capacity.

It is neither possible nor necessary to eradicate the fiscal deficit immediately. But it is essential to give clear signs that there is the political will and technical capacity to reform the social security, tax, functional and federal systems. Showing the plans for comprehensive public sector reform has two benefits s. On the one hand, people will be more willing to keep their savings in pesos if they are confident that monetary issuance will ease. On the other hand, it will facilitate an agreement with the IMF to strengthen the Central Bank’s reserves.

Certainly, the design and implementation of such reform require a high investment of political capital. But the dollar instability showed that there are limits to monetary expansion. If there is now too much confidence in the Treasury’s capacity to take on debt, the Cambiemos government’s mistake will be repeated. The latter has relied on “gradualism” financed by debt tied to the dollar in order to circumvent the State reform. The experiment ended in a crisis. Changing strategy requires audacity and innovation, but it is the only way to stop deepening productive and social degradation.