﻿ In advanced countries, there is no income tax floor - IDESA

In advanced countries, there is no income tax floor

Argentina’s problem is not the political rift between Kirchnerismo or anti-Kirchnerismo, but the consensus around mistaken ideas. One of them is a strong belief that salaried workers and pensioners should not pay income tax. In well-organized countries, most of the population pays income tax. 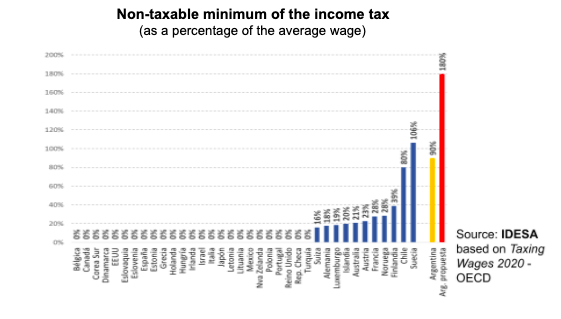 The ruling party presented a bill to raise the minimum non-taxable amount of the income tax from AR$ 75,000 to AR$ 150,000 for a single salaried worker. For a married worker or a worker with a family, the increase would obviously be proportional. The aim is to make fewer people subject to income tax. Officials estimate that with this increase in the “floor” of income tax, 1.3 million people would no longer pay this tax. The solid consensus generated around the measure makes predict that a large majority in Congress will approve it.

For several years now, salaried workers with formal wages close to the average have paid income tax. For example, in 2020 the non-taxable minimum for a single worker was AR$ 55,000 when the average formal salary reached AR$ 62,000 as per the end of the year. This means that the “floor” became approximately 90% of the average wage. With the proposed change, it will be 180% of the average salary.

One interesting question is how much the earnings floor is in other countries. Taking the 36 countries of the OECD, which encompasses developed plus some developing countries, it is observed that:

These data show that among countries better organized than Argentina, the strategy of not applying floors or doing so at relatively low levels compared with the average wage prevails. As in Argentina, it is also common to apply special deductions (for spouse, children, and other expenses, such as education, health, etc.). But it is understood that people should be taxed on all or almost all of their income. Furthermore, most countries apply tax rates that increase with the level of income. The logic is to set progressive taxation, understanding that a fair society taxes more as people’s income rises.

The comparison with Argentina reveals a major contradiction. In Argentina, on the one hand, there is a broad consensus that the state must be present to guarantee equity. On the other hand, the main tax that contributes to equity (income tax) is strongly rejected. There is a lot of talks about the political “rift” between Kirchneristas and anti-Kirchneristas in Argentina. But there is no such a “rift”. What there is, is sturdy agreement around contradictory ideas. People’s claims demand state intervention to guaranty equality, but at the same time reject income tax. This forces the state to finance itself with monetary emission and/or regressive and distortionary taxes, i.e. taxes that generate social inequality.

The path to prosperity with equality is not the one that avoids progressive taxation but the one that organizes the public sector to provide high-quality services. Gather consensus around the notion that fewer people should pay income tax is easy, but highly unproductive. It is the way to deepen the decline further. Building consensus around a comprehensive organization of the public sector is much more complex and challenging, but honest. Because it is the way to promote economic growth with social inclusion.