﻿ Unifying taxes it is possible to lower their burden - IDESA

Unifying taxes it is possible to lower their burden

Lowering the tax burden at the expense of losing public revenue contradicts the zero deficit target. In Córdoba province, the financial and administrative pressures on small taxpayers have been reduced increasing public revenue. This has been obtained by unifying national, provincial and municipal taxes. There is a broad consensus on the need to lower the […] 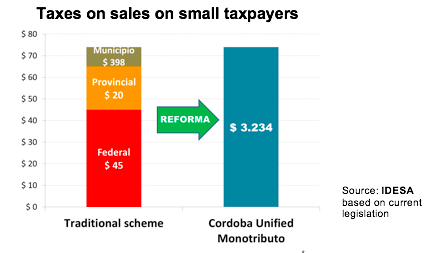 There is a broad consensus on the need to lower the tax burden. The conviction that there is no margin to lose public revenues given the high fiscal deficit is also widespread. Also, it is assumed that in pre-electoral periods, there is no possibility to make structural reforms. Thus the public policy end up stuck, which contrasts with the delicate situation produced by prolongation of the crisis. The current situation urgently demands innovative solutions, while the public policy response remains lethargic.

An interesting exception is the Cordoba Unified Monotributo. The idea is to merge the national, provincial and municipal taxes which are charged overlapped on the small taxpayers into a single fee. Small taxpayers contribute a small fraction to the tax revenue but, because they are small and massive, they demand a non-proportional administrative effort.

Taking the case of a self-employed who generates income between USD 450 and USD 550 monthly, it could be useful to show how the reform has worked. According to the regulations of each jurisdiction, this small taxpayer must pay monthly the following amounts:

These data show the burden of bureaucracy produced by running three different taxes to the same taxpayer for the same taxable event (a sale). This is a widespread feature in the Argentine tax system which is originated in the extensive tax powers that the three levels of government can exercise. The reform in Córdoba made the three taxes disappear and be replaced by the Córdoba Unified Monotributo whose monthly amount is the sum of them (USD 74 monthly). The change has lowered the administrative burden to taxpayers and the public sector by alike since now there is only a single monthly payment instead of three and other types of interactions (such new registrations, corrections, cancelations) between the taxpayer and the tax authority have been reduced to one third.

Although the goal of the reform is the simplification, the positive impact it had on revenue has been surprising. For the province, almost immediately –in just 2 months from the starting point– new taxpayer registration expanded by 40% and the non-delinquency rate rose from 45% to 58% in the month of the expiration date and from 54% to 64% in the next month. In the municipalities, the increase of new taxpayer registration exceeded 50%, making it possible to more than compensate for the taxing rate reduction that the municipalities had to implement to be incorporated into the unified tax. This suggests that if the reform were extended to the rest of the country, it would benefit 1.9 million monotributistas currently registered and could advance in the formalization of the more than 2 million self-employed workers who now operate “in the shadow.”

Even more interesting would be to replicate this experience to the rest of the taxpayers. That is, with those who exceed the threshold that qualifies as a small taxpayer. Unifying VAT, sale tax and municipal taxes for medium and large taxpayers would mean a substantial advantage in terms of simplification that would make the lowering of the tax burden possible without loss of public revenue. If the unification would be replicated in property taxes, which are also overlapped (federal personal wealth with taxes on real estate and motor vehicles applied by the provinces and municipalities), the so-called goal to eliminate distortionary taxes would no longer be a mere expression of wish.

It is highly suggestive that this innovation did not emerge in a jurisdiction politically close to the national government, such as the Autonomous City or the province of Buenos Aires. This fact shows that in the face of the pressing challenge of modernizing public management, it more important the common sense than the partisan affinity.