﻿ It is possible to duplicate the taxes on wealth - IDESA

It is possible to duplicate the taxes on wealth

In Argentine society, the aspiration to promote social justice is adamant among the majority of the population. But for this to happen, a less regressive tax structure is essential. The fiscal crisis is the opportunity to go ahead in decreasing distortionary taxes on production and strengthening the taxes on wealth. The strategy of keeping the […] 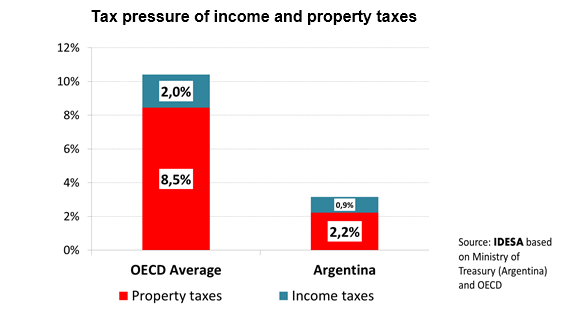 The strategy of keeping the dollar stable with a benchmark interest rate of 40% may be attractive to those who do business with financial speculation. But for the production sectors, especially SMEs, it is extremely harmful. The evidence, according to the Central Bank itself, that in the first half of 2018 the rate of rejected paychecks doubled with respect to the historical average is a powerful indicator of the urgency with which the fiscal deficit must be reduced.

In the goal of the ordering the public finances, the federal government announced its intention to stop interfering in the administration and financing of services that are or should be in charge of the provinces and municipalities. In order to avoid damaging the finances of local governments, therefore it is essential to take measures to improve efficiency, adapt some local fares and expand the sources of taxation.

In addition to reducing tax evasion, fiscal spaces can be found among progressive taxes. To support this idea it may be useful to take a look at some data on tax pressure. According to the Argentine Ministry of Finance and the OECD it is observed that:

These data show that, in Argentina, progressive taxes represent only a third of the tax pressure compared to the developed world. It is a flagrant contradiction with the speeches and aspirations of the majority of the population that declaims their desires for a more egalitarian and inclusive society with more social justice. To move towards a society with more social cohesion, a more progressive tax structure is a necessary condition, although not sufficient. Therefore, it would be very pertinent to take the urgency of the fiscal crisis as the opportunity to advance on tax progressivity.

Both taxes (income and property) suffer weaknesses. In the case of income tax, in the last decade there was a messy administration that generated controversy and social resistance. But in the case of property taxes the reverse process occurred because they lost importance gradually and silently. The weakening occurred both at the national level (tax on personal assets) and sub-national (tax on real estates and cars). This background plus the fact that in Argentina less than half of property taxes are charged compared to developed countries make it possible to think in strengthening the property tax.

A technically consistent and politically viable proposal to be implemented in the very short time is to suspend the reduction of the personal property tax rate scheduled for next year and redistribute it automatically to the province where the taxpayer lives. Along with this, it could be established that part of the real estate and motor vehicle tax are considered as payment in advance of the tax on personal assets. In the future, all property taxes can be unified and their administration transferred to the provinces.

The international evidence shows that in Argentina there are excesses of distortionary and regressive taxes and space to expand the progressive ones. Faced with the urgent need to reduce the fiscal deficit, there are justifiable doubts about the feasibility of sustaining the gradual plan scheduled last year to reduce distortionary taxes on production (taxes on wages, on sales, on legal contracts, on bank transfers). To take a structural step towards a tax system more similar to that of the more developed countries, it is pertinent to strengthen the federal tax on property and unify it with the taxes on property managed by the provinces and municipalities.