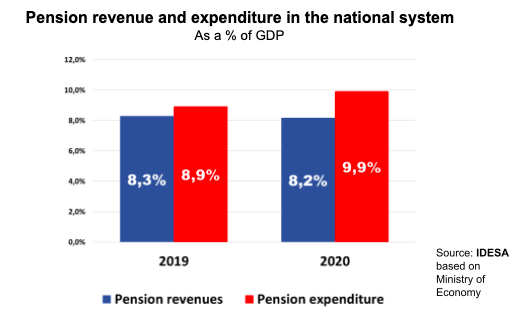 The national fiscal indicators for 2020 are available. Total public revenues grew by only 23% year-on-year, while primary expenditures (before debt interest payments) grew by 63%. This imbalance caused the primary fiscal deficit to go from almost AR$100 billion in 2019 (when the target was a zero primary deficit) to a deficit of AR$1.8 trillion. In other words, the primary deficit multiplied by 18 times. If interest payments on public debt are added, the fiscal deficit rises to AR$2.3 trillion.

The public finances also deteriorated sharply in terms of Gross Domestic Product (GDP). The explanation is that the GDP grew in nominal terms by only 26%. Hence, the primary deficit in 2020 amounted to -6.5% of GDP. It should be borne in mind that this refers to executed expenditures (“cash” criterion). When accrued expenditure is taken into account, something that will be known in the upcoming months, the primary deficit may rise even higher.

Certainly, a large part of this deficit is transitory because it originates in COVID-19. But it would be worth analyzing the portion with structural roots, such as the pension system. In this respect, according to information published by the Ministry of the Economy, it can be seen that:

These data show that the structural pension deficit –understood as the difference between own revenues and the pension payment– increased substantially. Part can be explained by the fact that revenues grew little, like the GDP. But the most relevant impact is the increase in retirement and pension expenditure. This increase occurred even though new benefits did not increase due to the administrative limitations of the ANSES and indexation was set at the government’s discretion. In 2020, the pension system will end up covering only 80% of retirement and pensions with its own income, thus putting enormous pressure on the national Treasury.

It is expected that the recovery of the economy will increase the pension system’s tax and wage revenues. However, it will not reduce the pension deficit. The reason is that with the recent change in the indexation rule –which ties the increase in pensions to the evolution of tax and wage revenues– pension expenditure tends to grow at the same rate as resources. Therefore, for the new indexation rule, the growth of pension revenues does not reduce the imbalance.

The new indexation rule would guarantee sustainability if the system were in balance or in surplus. But when spending on pensions is higher than revenues, increasing pensions at the same rate as revenues means that the imbalance grows nominally. Adopting the rule that pensions should increase at the same rate as revenues when they are at a historic low level –due to the COVID crisis–, is a mistake that will accelerate the pension crisis.

In order to generate macroeconomic stability and have the fiscal space required for development policies, it is essential to reverse the growth in the pension deficit. This cannot be achieved by changing the indexation rule but by tackling a comprehensive reorganization of the pension system. The essential points are: the elimination of special regimes (and the sector that aspires to more advantageous benefits should cover its additional cost with special contributions to a capitalization regime); limiting the possibility of accumulating retirement with the spouse’s pension; closing moratoriums; and applying rules for adjusting the retirement age to demographic dynamics.