﻿ Fiscal deficit fall thanks to soybeans and lag in pensions - IDESA

Fiscal deficit fall thanks to soybeans and lag in pensions 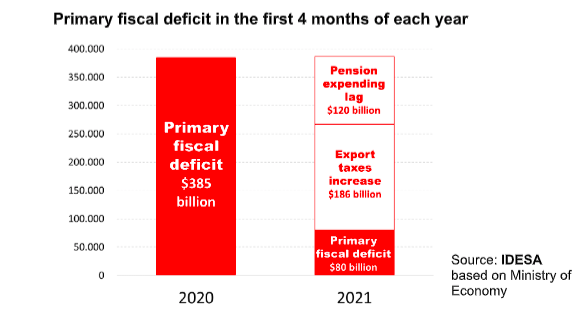 The first 4 months of 2021 saw a marked reduction in the fiscal deficit compared to last year. Specifically, the primary fiscal deficit (before debt interest payments) went from $385 billion last year to $80 billion this year. This generates controversy, even within the government. Some highlight this fiscal performance as positive. Others consider it inopportune at such an economically critical moment the country is going through.

Both diagnoses overlook the fact that the reduction of the fiscal deficit is explained by the inflation acceleration. It is not the first time that when inflation rises, the fiscal deficit temporarily decreases. The reason is that while revenues closely follow the pace of inflation, expenditures lag behind. In the current case, national government revenues grew at a rate of 64%, while public spending grew 33%.

In addition, there are other transitory factors. The information published by the Ministry of Economy can shed some light on them. According to this source, in the first 4 months of this year compared with the same period the year before, it is observed that:

These data show that, had it not been for the extraordinary increase in soybean prices and the delay in social security spending, the fiscal deficit would have been similar to last year’s. Both factors are transitory. The soybean price is at a historically high level and experience indicates that it will go down at some point. Pension expenses will be updated in the second part of the year. In addition, the ANSES (the pension agency) is granting only half of the new pensions it was granting before the pandemic due to administrative failures. In other words, the fiscal situation is still very weak.

The transitory improvement is a typical fiscal adjustment due to inflationary acceleration. It is boosted by extraordinary situations such as the price of soybean and the delays of ANSES in granting new pensions. It does not have a solid basis because it depends on the inflation continuing growing and the extraordinary price of soybean. Nor does it provide room to increase expenditures or lower taxes as a palliative measure against the devastating effects of the pandemic. Since there is no way to finance more deficits with more debt, it will force more inflationary money emission. This will mean more fiscal adjustment thanks to an accelerating inflation, with more population impoverishment.

The way out continues to be an integral public sector reorganization. It is not only a matter of fiscal adjustment but of improving public sector management. The State must deliver more and better public goods in return for the effort made by society with its taxes. For example, the alternative of recognizing women years of pension services for each child should be the trigger for a more comprehensive transformation that includes the equalization of the retirement age, the improvement of the Universal Pension for the Elderly (PUAM), the definitive closure of pension moratoriums, and the revision of survivor pensions.

The reduction of the fiscal imbalance in the first four months does not justify the optimism of the orthodox views because it is based on transitory factors. Neither does it justify the heterodox view that sees it as an opportunity to increase public spending because this will lead to more emission and, therefore, more inflationary adjustment. It is much more conducive to address an integral organization of the State that will serve as a platform to deploy a sustainable strategy for social development.