The challenge now is to support the reduction in public expenditure

In the first half of the year it can be seen a significant fall in the fiscal deficit. No less relevant is that it occurred, not so much because of an increase in income, but because public spending grew much less than inflation. The key now is to quickly reorganize the public sector to give […] 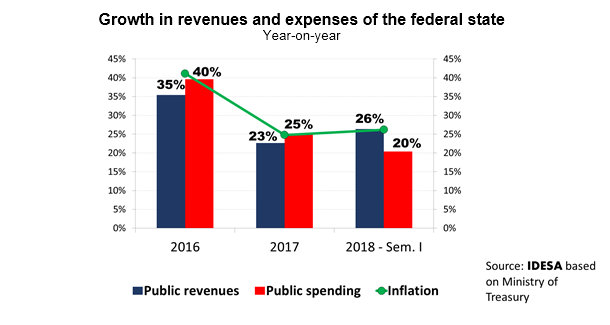 The results of the federal public finances corresponding to the first semester of 2018 were announced. The primary fiscal deficit (before interest payments) fell from US$ 5.1 billion to US$ 3.8 billion compared to the same period of the previous year. This reduction is almost equivalent to the increase in debt interest payments that went from US$ 4.0 billion to US$ 5.2 billion. Thus, the total fiscal deficit fell slightly from US$ 9.1 thousand to $ 9.0 billion between the first half of 2017 and the first half of 2018.

In the context of the prevailing high inflation, that the fiscal deficit does not grow nominally implies a significant reduction measured in terms of constant prices. It is premature to draw definitive conclusions because the reduction corresponds to half a year and it can be partly explained by a greater propensity to defer payments. But the change of tendency is auspicious. Since 2010 that there is not a nominal reduction in the fiscal deficit.

Another important point to analyze is how this incipient but encouraging process was achieved. According to the information published by the Ministry of Treasury, it can be observed that:

These data show that the reduction of the fiscal deficit is mainly explained by a strong deceleration of public spending. While in 2016 and 2017 public spending grew at the same rate as inflation, in the first half of 2018, revenues have increased at the inflation rate while the nominal increase in public spending was about 6 percentage points lower. The austerity was focused on the economic subsidies, the discretionary transfers to provinces and especially in public investment. The containment of these expenditures was enough to more than offset the increase in spending on pensions that continues to grow well above inflation.

For this change of trend to be financial, social and politically sustainable, it is essential to reactivate the economy. Therefore, it is essential to maintain the schedule of reduction of distortionary taxes. Part of the negative impacts on the collection should be compensated with adjustments of other taxes (such as strengthening property taxes and eliminating exemptions, among others) and reductions in evasion. But the most important thing now is to deepen and sustain the reduction of spending.

The freezing of discretionary transfers to the provinces is only a preliminary step in the face of the challenge of institutionalizing the decision of the federal state to stop interfering in provincial and municipal functions. Because of the magnitude of the funds involved, the central point is that the federal state should stop administering or subsidizing the public services of the metropolitan region. But it is also necessary to agree with the rest of the provinces the elimination of the national programs through which supplies and repairing for schools, health centers, streets, and assistance in provinces and municipalities are discretionally distributed.

With this rethinking of the role of the federal state, the fiscal space needed to recover the public investment will emerge. This investment corresponds to interprovincial infrastructure as national routes, rail transport, ports and waterways, and air transport. The other great challenge of the federal state is to give sustainability to the pension system. For this, it is necessary to eliminate privileged pension regimes and the survivor pension rule that leads to the duplication of benefits when a retiree dies.