﻿ Peso debt is not less risky than dollar debt - IDESA

Peso debt is not less risky than dollar debt

It is unlikely that the Treasury will be able to roll over all the peso debt maturing in the coming months. This will force the Central Bank to add money printing –additional to the already allocated– to finance the fiscal deficit. It is demonstrated that debt in pesos is as traumatic as debt in dollars. 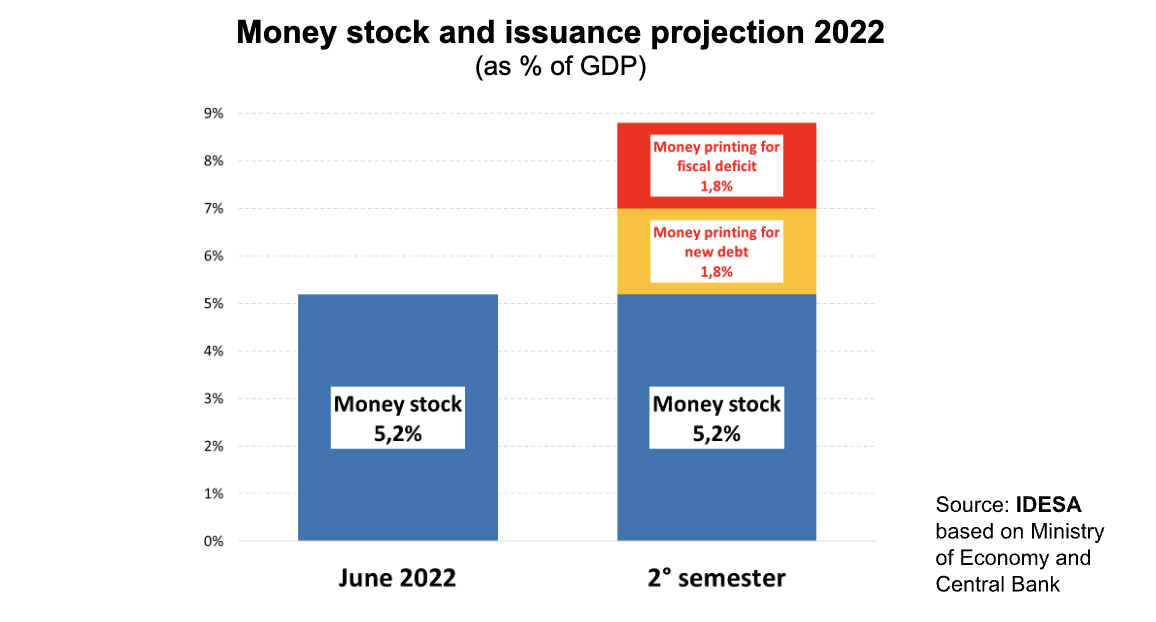 While the reasons for former Minister Guzman’s resignation are multiple, surely the trigger was the perception that it is not possible to roll over all of the Treasury’s peso debt maturing in the coming months. This disarticulated the plan to roll over all peso debt at maturity and to take on additional debt to prevent the fiscal deficit from being entirely covered by monetary issuance. On June 29, debt for the equivalent of 0.8% of GDP matured and could not be fully rolled over. This forced the Central Bank to issue extra money –additional to the destined to cover the fiscal deficit–to buy the peso securities that could not be renewed. On July 2, he resigned.

The previous minister left, but the same challenge remains for the new minister. In the second half of the year, there are debt maturities in pesos equivalent to 3.7% of GDP. Approximately half of this debt is in the hands of public agencies and will surely be rolled over. However, if the private sector is not willing to roll over the other half, the Central Bank will have to continue printing more money.

Considering that the monetary base (cash and savings banks) is 5.2% of GDP as of June 30, the following can be projected for the second half of the year:

These data show that a strong increase in the money stock is expected in the coming months. If people were to deposit this additional money automatically in time deposits, the Central Bank could recover the excess of printing by selling Leliqs to the banks. Thus, the inflationary impact of the extra money would be mitigated. But for this to happen, confidence and attractive interest rates are needed. As these two ingredients are missing, many people will surely prefer to buy dollars and other goods, instead of depositing pesos in time deposits. This will accelerate inflation.

This bleak outlook led the Minister of Economy to emphasize her commitment to fiscal balance. However, inconsistencies and voluntarism prevail in the instrumental aspects. Updating the valuation of real estate in order to improve tax collection requires a public management capacity that is lacking. Proof of this is that neither the previous government nor the current one was able to implement it. The segmentation of energy tariffs poses a similar problem. The scheme is too complex for the weak management capacity of the State. The consequence is that the tariff raises continue to be postponed and spending on energy subsidies accelerates. The imposition of budget quotas on public agencies is a very rudimentary and inefficient instrument. It is most likely that the agencies will continue to accrue expenses so that there will be no genuine reduction but only a deferral of payments.

Financing chronic fiscal deficits with debt in dollars (like the previous government did) or with debt in pesos (like the current one does) will not change the outcome. The end result is always a crisis. The way out of this situation is not through a traditional fiscal adjustment (increasing revenues and cutting spending) as the new minister tried to outline, but through a comprehensive reorganization of the State. This means unifying taxes, eliminating overlapping expenses between levels of government and reorganizing the social security system.