The cost of Leliqs is equivalent to 8 million minimum pensions

The economic crisis ceased to be the center of attention due to the serious incident suffered by the vice-president. But the economic situation goes on worsening. Proof of this is that what the Central Bank spends on Leliqs interest is already equivalent to two-thirds of what the ANSES spends on pensions and retirement benefits. 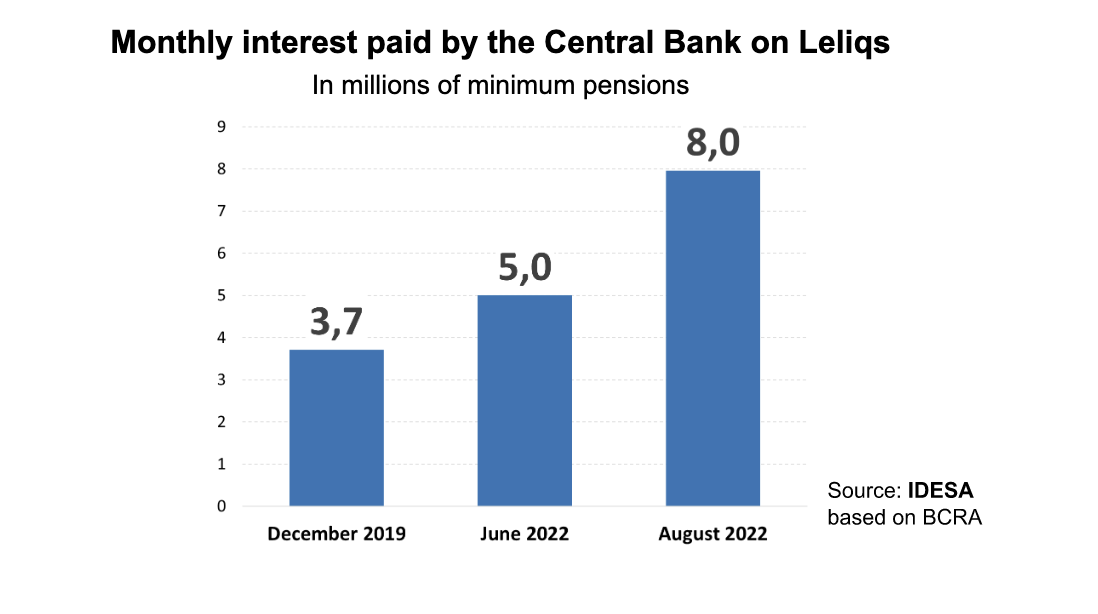 The fiscal imbalance is covered with debt or with monetary issuance. In terms of debt, savers are less and less willing to lend to the State. This increases the interest rate. At the end of August, the Treasury contracted debt at an annual interest rate of 107%. Even more revealing is that another part of the debt that was renewed was with bonds that are updated according to inflation or the dollar, whichever is higher. The situation is reminiscent of that of August 2019 when the previous government declared the bidding of Treasury bonds deserted and proceeded to the “re-profiling” of bonds. At that time there was a commitment of no monetary issuance, while now there is a more predisposition to print money.

But excessive monetary emission puts pressure on inflation. To mitigate the impact, the Central Bank issues Leliqs. Through this instrument, banks deposit the money they collect from people’s deposits in the Central Bank. But the Leliqs pay interest that implies more money issuance, which, paradoxically, feeds back inflation.

For this reason, it is very relevant and necessary to analyze the magnitude of monetary issuance generated by Leliqs interest. In this sense, according to Central Bank data, the following is observed:

These data show the enormous cost of absorbing the excess of money through Leliqs. ANSES pays 4 million minimum pensions every month. This implies that, with what the Central Bank issues to pay the interest on the Leliqs, the minimum pension could be tripled. Compared to the total pension expenditure, what the Central Bank pays in interest on Leliqs is equivalent to two-thirds of what the ANSES spends on pensions per month.

Since the new Minister of Economy took office, there has been no detailed description of his strategy. The announcements contemplate three central elements: reduction of the fiscal deficit, devaluation (without generalized jumps) in the official exchange rate to reduce the pressure on the Central Bank’s reserves, and an increase in the Leliqs interest rate to absorb monetary emission. The sequence and dosage of each of these instruments are of decisive importance. Therefore, it is very relevant that in terms of public spending reduction there are more announcements than actions. Also, as regards the exchange rate, the official dollar continued to rise below inflation, which is why it was not possible to accelerate the liquidation of exports. The only thing that was put into practice was the increase in the interest rate. This sequence accelerates the imbalances, as shown by the exponential growth in the interest paid on Leliqs.

It is not enough just to devalue more aggressively. While a devaluation shock reduces many expenses, the opposite is true in terms of economic subsidies. The devaluation raises the costs of public services and, with fixed tariffs, increases the need to cover the difference with subsidies from the Treasury. The inflationary impact of the devaluation will be compounded by the impact of a higher emission to cover the increased need for subsidies. This indicates that both the interest rate hike and the devaluation do not solve the problems. On the contrary, they aggravate them and make it unavoidable to address the fiscal issue.

In fiscal matters, an integral ordering of the State is needed. But what is urgent is to get out of the irrational management of public utility tariffs. In order for subsidies to be reduced, tariffs must grow above inflation. This seems very difficult to achieve with the entangled tariff scheme that has been announced. Beyond the exclusive attention focused on the incident suffered by the vice-president, economic problems continue to deepen, and both the increase in economic subsidies and the interest paid on Leliqs.