﻿ The central bank retains half of the banks’ loans - IDESA

The central bank retains half of the banks’ loans

Some officials demand increases in public spending, arguing that monetary emission does not generate inflation. But Central Bank officials seem to think otherwise, to the extent that they already absorb half of the banks’ lending capacity. A similar contradiction caused the Cambiemos government to fail. 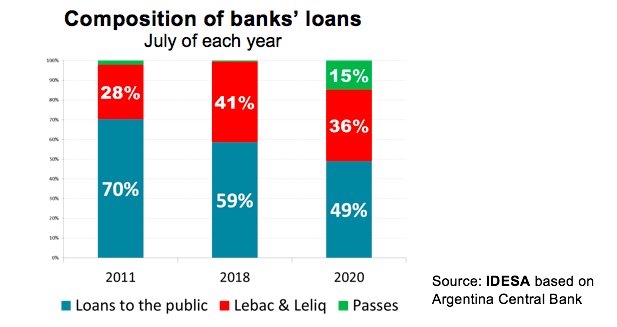 Since the beginning of the current government’s administration, monetary printing has doubled. However, core inflation remained constant in the order of 50% per year. This evidence casts doubt on the causal relationship between printing money and inflation. This discussion is very typical only in Argentina. In well-organized countries, regardless of ideologies, it is assumed that emission causes inflation. It is also recognized that the relationship is far from linear or immediate. That is why those countries use money printing to avoid recessions. But these interventions are transitory and subject to a close price monitoring. The possibility of massive and indefinite money printing to finance chronic fiscal deficit does not come into play.

To understand why high monetary emission is not being fully reflected in Argentina’s prices so far, it is necessary to consider two instruments managed by the Central Bank: the LELIQ and the passes. LELIQs are bonds that the Central Bank sells to banks. The passes are loans that the banks make to the Central Bank. In both cases, it is money that the banks, instead of lending to people and businesses, lend to the Central Bank by charging an interest rate. In this way, with LELIQs and passes, money is taken out of the market that would otherwise go to buy goods, services, and dollars.

How is the Central Bank using these instruments? According to data from the monetary authority, total bank loans were distributed as follows:

These data show that, since the end of the great international bonanza in 2011, the Central Bank has played an increasingly important role in the banks’ loan portfolios. In 2018, when the current exchange rate crisis began, the Central Bank’s practice was accentuated to curb inflationary acceleration. Currently, the Central Bank already absorbs half of the banks’ loans. This monetary absorption, plus the fall in consumption due to the quarantine, are key to containing inflation.

More important is that there are conflicting views within the government. On the one hand, some believe that it has been proven that issuing money does not cause inflation and, therefore, public spending can be further expanded. Among these proposals are the idea of eternalizing the Emergency Family Income (IFE) under the euphemism of Universal Income, maintaining subsidies to public services, appointing almost 300 additional judges and judicial officials, giving subsidies to those killed by COVID and major public works plans. On the other hand, are the Central Bank officials who act according to the idea that this money printing is destabilizing. That is why they absorb money from the banks aggressively.

The situation is similar to that which led to the crisis of the Cambiemos government. In the first two years of the administration, under the gradualism, the high fiscal deficit was financed with dollar external debt. When dollars were coming in, money supply expanded because the Central Bank had to issue money to buy the incoming dollars from the new debt. In order to prevent this issuance of money from turning into higher inflation, the Central Bank absorbed it with the LEBACs (the predecessors of the LELIQs). In 2018, LEBAC holders sold them, bought dollars massively, and triggered the crisis. The same outcome can be expected soon if there is no change in the strategy. The crisis may come when depositors lose confidence and take out their savings in pesos to consume or buy dollars. The Central Bank will be able to hold them temporarily by paying them higher interest rates. Still, it will not be able to stop the run against the banks’ deposits indefinitely.

Government officials should homogenize criteria to avoid repeating the same mistake as Cambiemos. It is reasonable to temporarily appeal to the money issuance to moderate the effects of the pandemic and use the instruments available to the Central Bank to moderate its inflationary impacts. But keeping financing the fiscal deficit with money is a guarantee of a new exchange rate and inflationary crisis.