Provinces receive more vat and profits than the federal state 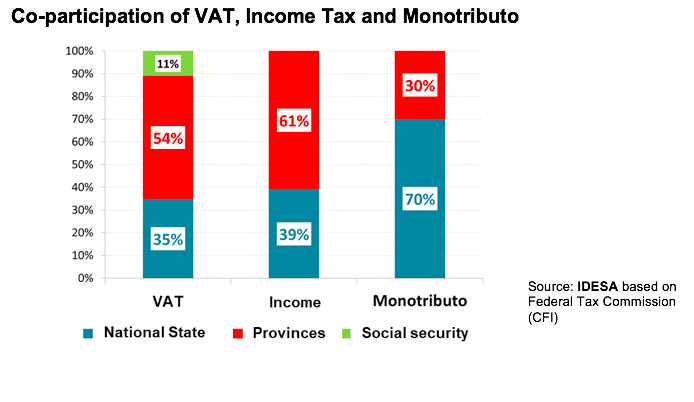 After the adverse result in the PASO, the federal government decided through two decrees to reduce to 0% the Value Added Tax (VAT) on a set of basic food products (oil, rice, sugar, flour, eggs, milk, bread, pastas and yogurt); it also ruled to reduce the Income Tax and to subsidize one monthly payment of the Monotributo. The objective was to alleviate the inflationary impact of the devaluation –which occurred after the primary election– reducing the tax pressure.

Most provinces rejected the measure. Fifteen of them appealed to the Supreme Court to avoid being affected by the decrees. Very quickly, the Supreme Court established that the federal government has to compensate with its own resources the fiscal impact of the decrees on the provincial revenues. That is to say, the tax reduction is maintained, but the revenue losses must be assumed entirely by the federal government without affecting the provinces’ incomes.

One point to bear in mind is that the federal tax agency (AFIP) collects these taxes on behalf of the provinces and automatically distributes them daily. According to the Federal Tax Commission (CFI), AFIP deducts 1.9% from the collection of all taxes to finance itself. The rest is distributed as follows:

These data show that, in the case of the two central taxes, VAT and Income Tax, the provinces receive a higher share than the federal government. The inverse situation occurs with the Monotributo, but its relevance is lower because it represents a small amount compared to the other two taxes. The federal government’s decision to lower these two taxes significantly affects the income that legally and legitimately belongs to the provinces.

The importance of the Court ruling does not only lie in the protection of provincial resources. It is also relevant because it is based on the arguments raised by the Entre Ríos province, which maintains that the decrease in its resources affects basic constitutional duties of the provinces. These are “… very especially, those that constitute the core of the federal guarantee of Article 5 of the National Constitution (administration of justice, municipal system and education) as well as those that are important in the area of fundamental rights (food, housing, health, protection of children and old age, etc.)…”. In other words, the Court is saying that the federal government must respect tax co-participation and distribution of functions between it and the provincial governments. In practice, this means that the federal programs of education, health, housing, and social assistance through which the federal government interferes in provincial responsibilities should be disarticulated.

Unfortunately, the Court acted with demagoguery and incoherence. Instead of repealing the decrees and urging the federal government to discuss tax measures with the provinces,  it opted for the demagogic decision to keep the taxes down with an ambiguous definition about compensation to the provinces. This is incoherent with other rulings pronounced by the Court.  In them, it established that judges and retirees do not pay Income Tax without fixing any compensation for the losses that this decision means.

Building a robust federal organization is vital to restoring economic growth. The Court ruling, beyond its weaknesses, is a new opportunity for the federal government and the provinces to agree on a more explicit and rational distribution of resources and responsibilities than the current chaotic situation.