﻿ There is no way to increase public spending - IDESA

There is no way to increase public spending

The Vice-President made public her demand for more public spending. Nominal spending can be increased, but not real spending, because inflation automatically causes it to lose its real value. The Vice-President’s proposal, shared by many Argentines, is at the core of Argentina’s decadence. 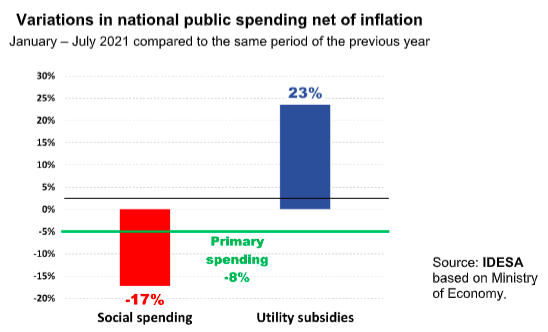 The electoral defeat in the primaries unleashed a severe political crisis. The vice-president’s most substantial reproach is the excessively conservative management of public spending at a time when people are experiencing many economic difficulties. Hindering public spending growth is, according to her diagnosis, the main reason for the defeat of the ruling party in the primaries.

Public spending grew so far in 2021. The Treasury issued bonds to renew public debt maturities and the entire new fiscal deficit was financed with monetary expansion. The Central Bank, for its part, had to absorb half of the money printed with Leliqs in order to prevent it from pressing over the exchange rate and the inflation. Thus, even though the Treasury and Central Bank debt has been pushed to its limits, inflation is averaging 46% per year.

To understand the public spending dynamics, it is useful to observe the data from the Ministry of Economy. According to this source, comparing the first 7 months of 2021 with the same period of 2020, it is observed that:

These data show that public spending grew nominally, but high inflation produced an important loss of real value. It is not that the government did not increase spending, as the Vice-President claims, but that inflation diluted it. This spontaneous way of making the “adjustment” in the public finances is very inefficient and regressive. Social benefits –which generally benefit the most vulnerable people– fell in real terms. Subsidies for electricity, gas, and transportation –which mostly benefit middle and high-income segments– grew above inflation.

What would have happened if spending grew nominally more than it did? Under current macroeconomic conditions, it would have been difficult to prevent inflation from accelerating. The reason is that it is not easy for the Treasury to borrow money to finance more spending (with a lot of effort it barely manages to roll over maturing debt). At the same time, the Central Bank’s capacity to absorb excess money printing is also stretched to the limit. Therefore, the nominal increase in public spending does not achieve real increases because inflation leads to a loss of the real value. Increasing public spending –as demanded by the Vice-President– would only have resulted in higher inflation with a fall in social benefits and more public funds diverted in favor of middle and high-income families through subsidies to utilities.

The big problem in Argentina is that the Vice President is not alone in this misguided approach. The idea that it is feasible and desirable to increase public spending is defended by her followers and by an important part of the opposition. It is a reflection of a widespread opinion in Argentine society that it is possible to spend without making the effort to pay taxes. Worse still, it is the belief that in order to win elections it is necessary to hand out money instead of proposing ways to increase investment and employment.

With these mistaken ideas, Argentina will not be able to end its decadence. The way forward is to organize the State so that inflation is not responsible for diluting the excesses. It is a matter of having a balanced public sector, with a reasonable tax burden and professional management. It is not so important the ideology that inspires the government, be it right-wing or left-wing, but that the State must work efficiently.