Change in indexing rule dos not solve the pension crisis

Once again, the pensions indexing rule generates intense controversy. It is overlooked that the pension system’s main problems are the indiscriminate granting of benefits without contributions through moratoria and privilege benefits. The indexing rule does not replace the necessary reform to tackle these problems. 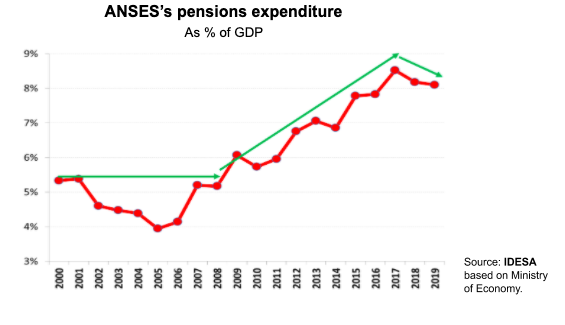 The federal government submitted to Congress a law proposal to change the pensions indexing rule. Although suspended by the ongoing government, the current rule establishes that pensions be updated by 70% for inflation and 30% for wages evolution. The previous administration defined this formula in 2017. The current government wants to return to the pre-existing formula before 2017, which stipulated that pensions be adjusted 50% for wages and 50% for tax revenues evolution.

A key point of the old formula, which the government now wants to restore, is the cap. The rule is that if the increase arising from the 50% wage/ 50% tax revenues is greater than the rise in the social security agency (ANSES) total revenues plus 3%, then the last calculation applies. The government emphasizes that this will restore sustainability because it ensures that pensions will not rise above the available resources. The main opposition party criticizes it since it could lead to a pension decrease if inflation exceeds ANSES total revenues increase.

The indexing rule is being the exclusive issue over the pension debate. Does the dynamic of the pension system justify this exagerated focus on this subject? Looking at what has happened to pension expenditure in the current century may help to find some answers. According to data from the Ministry of the Economy, it can be seen that

These data show that while there was no mobility rule (2000 – 2008), spending on pensions remained controlled. Inflation reduced the pensions’ value in real terms, which were indexed discretionally by decree. As the judiciary did not tolerate this arbitrariness, in 2009 the rule began to work. This rule is the one that is now to be re-established. From 2009 onwards, pension expenditure growth was destabilizing (it increased by 65% more than the economy did). In 2017, pension expenditure fell in terms of GDP with the change in the indexing rule and the inflation acceleration. But when the accelerated inflation adjustment should have been done, the current government suspended its application.

The manipulation of the pensions indexing allows temporary control over pension expenditure. The counterpart is the population’s irritation and massive litigation. The pension system’s fundamental problem is the disorder in the rules of benefits, which generates an expansion of the pension expenditure that cannot be genuinely financed. Among the most critical points are, first, the moratoria that indiscriminately give away pensions without contributions. Second, the growth of double benefits, particularly for people who accumulate a retirement due to moratoria with a pension due to the spouse’s death. Third, the profusion of special (“privileged”) regimes that retire people with lower age, or with fewer years of contributions or with greater benefits to the general regime.

The pension debate is passionate. It includes crying in public and throwing stones. Hypocritical because politicians change their mind depending on whether they are in government or in the opposition. Useless because the substantial issues are not discussed. The truth is that pension rules make promises that cannot be financed. As long as this does not change, the escape valve will continue to be high inflation, depreciating the pensions’ values in real terms with the indexing rule manipulation.

A more rational debate is needed. It must be supported by actuarial studies, and focused on the critical issues. With pension reform, it will be possible to improve equity together with fiscal sustainability, an essential step to recover macroeconomic stability.