The conflict over co-participation is full of hypocrisy and mediocrity. The federal state spends much more money in favor of Buenos Aires City than it takes away from it. Simultaneously, 19 governors submissively support the measure for fear of reprisals, instead of demanding to upend subsidies for the metropolitan area. 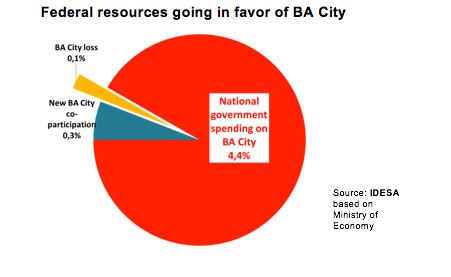 The measure was presented as a correction of a 2016 decree through which Buenos Aires City started receiving federal resources as co-participation in compensation for the city’s police transfer. Now it was established that half of this allocation will not be directed to Buenos Aires City any more but the Province of Buenos Aires. This change continues to be an allocation of federal resources in favor of the metropolitan region. Therefore, nothing changes for the rest of the provinces placed in the interior of the country.

The national government claims that it is an act of redistributive justice taking from a rich jurisdiction to give it to a poor one. The question is: how much distributive justice the national government apply with BA City? Comparing the mentioned reallocation of funds with the volume of federal resources spent within BA City helps find some answers. According to data from the Ministry of the Economy in 2019, it can be seen that:

These data show that, more than an act of redistributive justice, it is hypocrisy. BA City is deprived of a part of what it receives via co-participation. However, public expenditure financed with national resources (from all the inhabitants of Argentina) is maintained in favor of BA City. It includes the federal bureaucracy’s expenses, subsidies for public services (electricity, water, gas, and transportation), and the justice service. This outlay in favor of BA City is equivalent to 40 times what the national government took away from it.

The origin of the problem is that most of the state functions are under the provinces’ responsibilities (education, public health, housing, security, justice), but they automatically receive only 40% of taxes. Thus the federal state holds an excess of funds, part of which is allocated in favor of BA City. Furthermore, it also uses part of this excess of public funds to bend governors’ political will. A piece of evidence is a letter signed by 19 governors entitled “Reducing Inequalities for a Federal Argentina,” endorsing the presidential action against BA City. Given that the redistribution was between two metropolitan areas, the only explanation for the governors to sign this letter is the submission imposed by the national government through the discretional allocation of federal funds among provinces.

The concentration of resources at the national level allows for local leaders’ submission and mediocrity. They were resigned to sign an incoherent letter instead of demanding that the federal government stop subsidizing the BA City and its surroundings belonging to the Province of Buenos Aires. By eliminating these subsidies, it would be possible to improve the provinces’ share in the tax co-participation.

Federalism does not mean “Robin Hood” actions robbing affluent jurisdictions and giving away to poor ones. Nor is it using federal funds to create alternative capitals in the country’s interior or augment national programs transfer to the provinces for education, health, or housing. Federalism means to eliminate co-participation, so each province recovers its tax-raising powers to self-finance itself. For the Northern provinces, a transitional convergence fund should be considered to accelerate their development. Only in this way provinces will move from submission and mediocrity to responsibility, autonomy, and innovation in public policies.