The former governor of Mendoza proposed independentism to avoid the historical arbitrariness of the federal state. His diagnosis is correct, but the solution is not the fragmentation of the country. It is enough eliminating tax coparticipation, which is the mechanism that induces the arbitrariness and mediocrity in public policy. 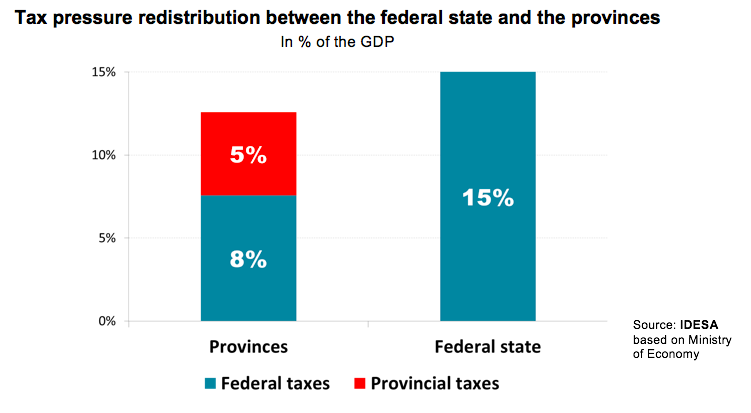 The former governor of Mendoza and the current president of the Radical Civic Union (one of the main political parties) firmly pointed out that some provinces may seek independence. The reasons mentioned are the arbitrariness with the regional productive sectors and with the provincial governments from the federal state. It is not the first time that the provinces in the most productive areas of the country (the central region) complained about the central government’s behaviors. But it is the first time that a prominent political leader talks about independentism.

Argentina is a federal country with a very particular tax redistribution scheme. The federal government centralizes the collection of national taxes through AFIP (the federal tax agency). It keeps for itself the collection of three taxes (wages tax, checks tax, and export and import duties) and redistributes the rest of the taxes (VAT, Income tax, Wealth tax, among the most important ones) automatically. In this redistribution, the federal state appropriates a further half, and the other half is directed to the provinces (primary distribution). Then, there is a second redistribution (secondary distribution) among the provinces, which is very controversial.

How does this tax redistribution end up? Starting from the total tax pressure –federal and provincial– which is 28% of the GDP, according to the Ministry of Economy, it is observed that:

These data show that the federal state appropriates more than half of the tax pressure. Part of this big share is explained by the fact that it finances the national pension system administered through the ANSES (the social security agency). But even excluding social security contributions, the concentration of tax revenues at the federal level is very high.

The opposite occurs with the responsibilities assigned to each jurisdiction. The provinces are in charge of the production of public goods such as basic education, public health, welfare assistance, local security, justice, social housing, and basic infrastructure. In contrast, the federal state is in charge of social security, higher education, and interprovincial functions, such as diplomacy, defense, transport, and energy networks.

The imbalance between tax redistribution and responsibilities between jurisdictions is evident. The exaggerated concentration of resources at the federal level is one of the main factors explaining Argentina’s decline. On the one hand, it has led to a large federal bureaucratic structure superimposed on local governments administrative structures. On the other hand, it generates very perverse incentives. At the federal level, it is difficult not to fall into the temptation of using national resources to build political power bending local politicians with a discretionary distribution of “aids” since their provincial and municipal treasuries are exhausted. At the provincial and municipal level, success is not guaranteed by proper administration but of ingratiating oneself with the federal government to receive those “aids”. This perverse scheme explained a significant share of Argentina’s decadence.

The former governor of Mendoza raised Argentina’s main problem to debate. But it is not necessary to appeal to extreme measures, such as independentism. Eliminating the tax coparticipation and establishing that the taxes paid by its inhabitants finance each provincial state would be enough. Thus the federal state arbitrariness and squandering of resources will be ended. For the economic backward Northern provinces, a limited Convergence Fund, financed by the wealthiest regions, should be put in place.