Official data show that students in public schools learn less, live in more overcrowded houses and have fewer computers. In this context, keeping schools closed may contain the contagion, but it will deepen the educational inequality since it hits the poorest children and youngsters hardest. 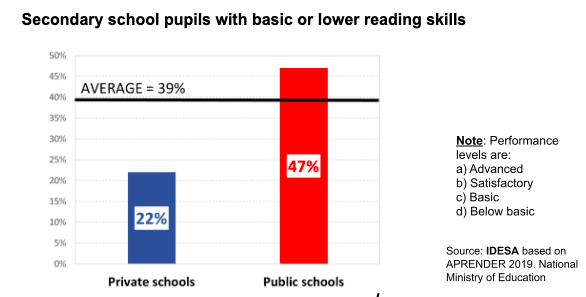 After almost a year with schools closed, the 2021 schooling calendar raises controversy. On the one hand, infectious disease specialists and teachers’ unions argue that schools should remain closed as long as there are not enough vaccines, especially when there is a second wave that threatens to be more contagious. On the other hand, the families bow for schools opening as they worry about their children’s negative consequences for not returning to the classrooms.

The results of the Ministry of Education’s APRENDER test that measures quality education in Argentina help to evaluate the costs of keeping schools closed. According to this official source, in 2019 it was observed that:

These data show that the school closures context is one of profound educational decay and inequality. It is likely that both problems have deepened in 2020 with schools closed as students in private schools have more advantages for virtual classes. Their homes are more digitalized, parents tend to be more monitoring about virtuality and schools tend to offer better pedagogical tools. Students in public schools have less educational home climate, fewer technological resources and schools offer fewer distance learning alternatives. APRENDER data show that 42% of students in public schools live overcrowded, while only 25% of those in private schools do. In addition, half of the poor households do not have computers.

A study published in the Journal of Labor Economics (2018) called “The long-term effects of teacher strikes: evidence from Argentina” points out that Argentine students suffered almost 1,500 teacher strikes with variations over time and across provinces between the recovery of democracy in 1983 to 2014. The latter means that Argentinean students lost half a school year on average in their school life due to strikes. According to this study, as adults, these students are less employable and have lower salaries. This evidence suggests that keeping schools closed may have short-term benefits (fewer contagions), but it imposes high social costs in the medium and long term.

The educational decline in Argentina is not apparent only when comparing with developed countries. In 2000, Argentina was at the top in Latin America in the international PISA tests. In the PISA 2018 version, Argentina is behind Chile, Uruguay, Costa Rica, Mexico, Brazil and Colombia, and at the same level as Peru, which in 2000 was behind Argentina as if Peruvians have two years less of education. In this context, keeping schools closed is a tragedy for children and youngster, especially the poor.

The federal government should stop interfering in the management of education. The provinces must determine whether and how to open schools and decide on central issues before COVID, such as teachers’ salaries. The national government should generate more information and foster debates on the poor educational results encouraging provincial administrations and unions to work towards the recovery of educational quality in Argentina.