﻿ The National Ministry of Social Welfare must be closed - IDESA

The National Ministry of Social Welfare must be closed

In its two decades of existence, this Ministry specialized in distributing welfare programs on a discretionary basis. It served only to encourage mobilizations and to use poverty for electoral purposes. In order to stop manipulating the poor and provide solutions, a structural change of strategy is necessary. 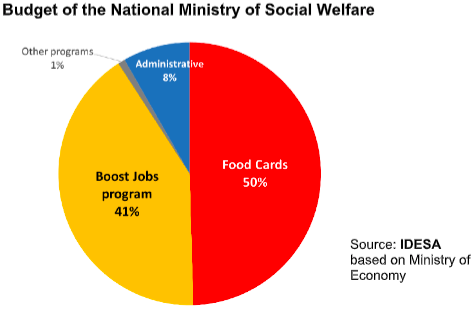 A large number of people gathered around the federal Ministry of Social Welfare to demand welfare programs. The protesting mob denounces discrimination in the delivery of welfare programs allegedly because they do not support the government. This is not an isolated or novel event. Mobilizations, street blockades, and protests have been a constant during the two decades of the existence of this Ministry.

The national government has two agencies to transfer money to vulnerable households. The most important is ANSES, which pays 4.4 million benefits of the Universal Child Allowance (AUH), 3.6 million retirements without contributions, and 1.4 million non-contributory pensions. In order to access these benefits, ANSES controls certain requirements for eligibility. The second is the Ministry of Social Welfare, which distributes social programs financed with funds from the national budget.

According to the budget data of the Ministry of Economy, the Ministry of Social Welfare has $350 billion available for the year 2021. The allocation of this amount is as follows:

These data show that the Ministry of Social Welfare, beyond its pretentious name, is –in comparison with ANSES– a marginal welfare administrator. It has a huge bureaucratic structure, concentrated in Buenos Aires City, which costs AR$23 billion annually in building expenses, salaries, and other inputs. But in the selection of beneficiaries, unlike ANSES, it applies discretionary decisions and “privatizes” this function on mob organizations. Therefore, it is not surprising that it is a powerful source of mobilizations and protests based on the manipulation of the people.

Article No. 121 of the National Constitution establishes that everything that the provinces do not delegate to the federal level is a provincial responsibility. No province expressly delegated welfare to the Nation. Therefore, the Ministry of Social Welfare operates as a federal arrogation of a provincial function. The federal State manipulates the ‘coparticipación’ (federal tax revenue share) to appropriate funds that should be distributed to the provinces for use in provincial functions. This generates overlaps, inefficiencies, and inequities. For example, the National Ministry of Social Welfare allocates 12% of the budget of its plans to CABA, which has only 4% of the country’s poor.

In the challenge of reducing poverty, the most important responsibility of the federal government is to generate a favorable context for jobs creation. In this sense, closing the Ministry of Social Welfare would make a fundamental contribution to improve the quality of welfare. It would contribute, for example, to put an end to the perverse practice of taking children and young people to protest marches. In order to get a good job, it is necessary to complete high school. This can only be achieved with children in schools.