Since the crisis began, at the beginning of 2018, the informal salary grew below the prices of the poverty line. This is the main factor explaining poverty increase. To reverse this social degradation, it is essential to lower inflation. For this, an integral public sector reform must be addressed. 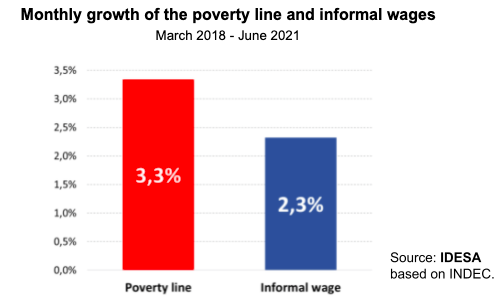 The INDEC officially publishes information on poverty every six months. However, with data from the INDEC household survey, it can be estimated that poverty in the 1st quarter of 2021 is in the order of 40% of the urban population. This implies an increase of about 5 percentage points compared to the first quarter of 2020, the last reference before the beginning of the strict lockdown.

The incidence of poverty is linked strongly to informality. The reason is that informal work is the main source of income for poor households. The level of informal employment is close to the pre-pandemic situation. In the first quarter of 2021, informal employment (including unregistered salaried non-professional self-employed) is close to 5 million workers in large cities. This number is similar to that of the 1st quarter of 2020. It fell a lot in the hard stage of the lockdown, but it has already recovered.

Once informal employment has recovered, remunerations of informal workers should be observed. Taking the period from March 2018 (when the Argentine current crisis begins) to June 2021, it is observed that:

These data suggest that with an inflation rate of 3% per month it is very difficult to reduce poverty. The increase in prices has caused the real income of informal workers to fall at a rate of 1% per month over the last three years. As a result, the remuneration of informal workers is currently 33% lower than it was at the beginning of the crisis. This is the fundamental reason why poverty in the 1st quarter of 2018 was 26% and in 2021 it is 40%. Inflation operates as a powerful “factory” of poor people because it undermines the informal workers’ remunerations.

Proposing to reinforce welfare plans to reduce poverty in a context of high inflation is either voluntarist or an act of hypocrisy. Giving money to some poor people (not to all) with welfare programs under ostentatious names, such as the “Empowering Work” program or the “Argentina against Hunger for Food Security and Sovereignty ” plan –among the hundreds that are also implemented by the provinces and municipalities– has no chance of solving the problem. On the contrary, due to their rudimentary design and discretional administration, it is clear that their functionality is not social (to reduce poverty) but electoral (to increase the power of those who manage them). It is also voluntarist or hypocritical to claim that will be converted into decent jobs. In the current inflationary context, there is no generation of quality jobs, much less for people with low levels of qualification.

Lowering inflation is not only essential to reduce poverty. As many polls point out, inflation is among the main concerns of the population. However, elusive and inconsistent approaches prevail in the electoral campaign. A broad consensus prevails that in election years public spending must be increased to put “money in people’s pockets”. It seems that a large part of the political spectrum does not listen to the people’s request, which is that the money that already reaches their pockets does not vanish due to inflation.

In order to reduce inflation and generate favorable conditions for investment and growth, a comprehensive reorganization of the public sector must be addressed. It is a matter of implementing an agenda of transformations that are neither right-wing nor left-wing but guided by common sense. The goal is to rebuild the State so that it is financially sustainable and can produce the public goods that the population demands.