Argentina’s poverty growth is associated with economic decline, pandemic mismanagement, and failure of compensatory policies. If one-third of monetary expansion had reached the most vulnerable households, poverty would have dropped to zero. 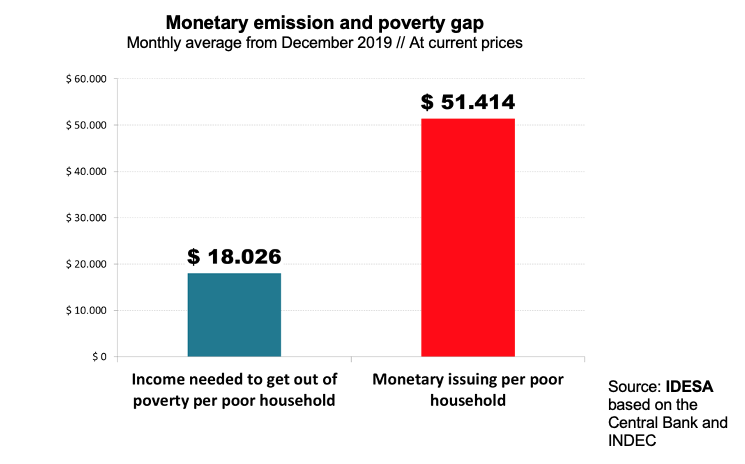 INDEC also reported that, in the first half of 2020, inequality increased. That is, the people who earn the most have seen their income to raise more than families that earn the least. The increase in poverty and inequality occurs in a government in which representatives of the poor (“piqueteros”) have significant influence, and millions of assistance plans, such as food cards and the IFE (emergency income transfer), are distributed. The contradiction between the so-called commitment to the poor and social involution is apparent.

One way to shed light on the causes is to compare the poverty gap with monetary emission, a policy intensely used by the government even before the pandemic’s emergence. According to information published by the Central Bank and the INDEC, it can be seen that:

These data show that the goal of “Zero Poverty” could have been achieved if only a third of the monetary expansion had reached the most vulnerable families. It is evident that prioritizing the poor is a declamation, but not a fact in the public sector administration. A large part of public spending and, therefore, of the monetary issuing is destined to finance different types of privileges such as special pensions, public employment in quarantine, subsidies to public services for the metropolitan area middle class, and public companies deficits such as Aerolíneas Argentinas. At the same time, welfare expenditure is channeled through hundreds of welfare programs, all very rudimentary and overlapped.

The dramatic social situation should make people aware that the only way to eradicate poverty is by generating opportunities for people to earn income from work. In this regard, it is needed a stable macroeconomy, a simpler tax system, and more rational regulations, especially labor ones. Also, very important is an educational system managed based on teachers’ merits rather than obedience to vested interest.

Neighboring countries’ experience shows that poverty reduction is neither a utopia nor a case for ideology. In 2006, Argentina, Uruguay, and Chile had similar poverty rates, on the order of one-third of the population. More than a decade later, in Argentina poverty grew to 35% before the pandemic. Uruguay and Chile, on the other hand, reduced it to less than 10%. The fall in poverty in Uruguay occurred under a leftist government (Frente Amplio), while in Chile, it happened with alternating governments of the center and the right. This is a very clear sign that ideology does not matter in reducing poverty.

Poverty reduction has no ideology, but it is unfeasible with inconsistent and mediocre public policies such as those practiced for many years in Argentina. Therefore, a basic requirement to start solving the issue of poverty is to address it with less hypocrisy and opportunism and more study and professional research.