﻿ 80% of investment in education goes to public schools - IDESA

80% of investment in education goes to public schools

Accepting that public schools are for the poor and private schools for families with medium and high incomes deepens social fragmentation. It would be more equitable and efficient to give the lower income families the possibility of also choosing a private school with financing and controls of the state. At the beginning of a new […] 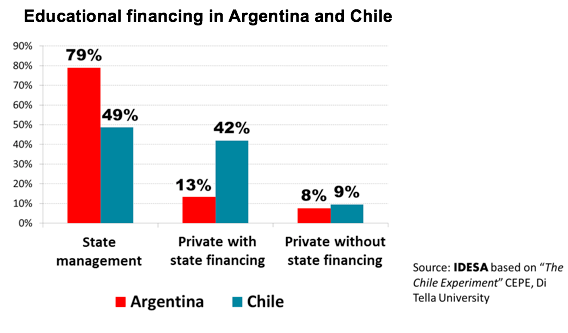 At the beginning of a new school year, the central issue is again the teachers’ labor conflict. It is tedious and mediocre for families to start worrying again of not knowing if their children will be able to attend classes normally.

Teachers’ labor conflicts have negative impacts on the quality of education. According to the PISA test, which measures skills of 15-year-olds obtained in the education system, Argentina in 2000 registered a score of 418 while in 2012 (last available) it fell to 396 points. Chile, to take a neighbor example, in the year 2000 had 410 points while in 2012 it had 441 points. While youngsters in Chile learn more and better in their schools, learning in Argentina gets worse.

Many factors explain this decline. One very important one is the educational financing scheme. In this sense, a study conducted by the Center for Evidence-Based Policy Evaluation (CEPE) of the Di Tella University shows that of the total public and private funding for education:

These data show, first of all, that the families that support the education of their children with private financing only represent the same proportion in both countries and are the minority. The substantive differences between the two countries emerge from the public financing of private schools. While in Argentina almost 80% of investment in education is allocated to state-run schools, in Chile educational resources are almost equally destined to state-run and private schools.

The other big difference between Argentina and Chile is the method by which public financing is funnelled to private schools. In Argentina, it is done through the payment of teacher salaries of the generally confessional schools, which is supplemented by a fee paid by the students. In Chile, public funding for private schools is channeled via vouchers to the less affluent families so that they can choose a private school and with that voucher pay the school fee. This has enormous positive impacts on the quality of educational management, since private schools operate under less rigid and bureaucratic rules than state-run schools do. For example, according to the CEPE study of the Di Tella University, in Chile between 58% and 68% of students attend schools where the director can hire and dismiss teachers, while in Argentina these proportions fall between 25% and 27%.

That state-run schools are a guarantee of social inclusion is a slogan only sustained by ideological conservatism. Evidence shows that, in practice, state-run schools operate as a powerful instrument of social fragmentation. Children from the poorest families are forced to go to state-run schools where strikes and archaic management rules prevail, while better-off families can access privately run schools, which, although they are also subsidized by the state, operate under much more productive rules.

Using public funds for the poor to access private schools is much more efficient and fair than maintaining state-run schools destined to shelter poor children. If the poor families were given the possibility of choosing a private school with state funding, not only it would pressure to improve the quality of education in state-run schools, but it would also begin to recover the dream of many Argentines: to see the poor child together with the well-off child attending the same school.