The economic and social deterioration caused by lockdown is severe. But the state of the public finances preludes that what is coming maybe worse. With an unprecedented level of fiscal deficit, the only way to avoid a more profound crisis is to address a comprehensive modernization of the public sector. 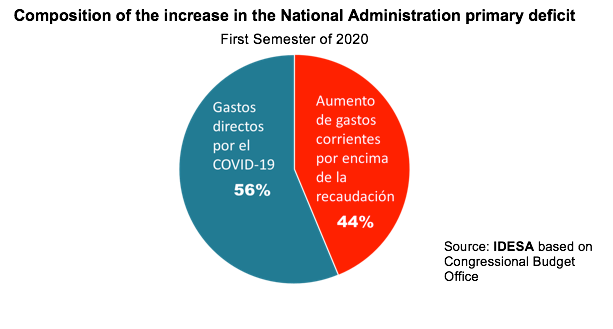 The federal government finally approved the Buenos Aires Metropolitan Area (AMBA) local governments to flex the lockdown. The move to a phase of greater freedom based on individual responsibility is not because the pandemic is under control. It is a forced response to social fatigue and severe economic deterioration.

The error in the strategy began when the federal government stated that life preservation is before the economy. This misconception led to the paradox of stopping the economy early and then having to relax the lockdown at the peak of infections. The authorities allege that the daily number of cases will not increase. The truth is that the number of infections is unknown. The main weakness of Argentina’s strategy continues to be contempt for mass testing. In any case, it is positive to move towards a more sustainable and tolerable economic and social approach.

The economic deterioration presents multiple facets. One of them is the state of the public finances. According to the Congressional Budget Office, looking at the National Administration public finance in the first half of 2020, it can be seen that:

These data show that the deterioration of the public finances has reached exceptional levels. Not only because the primary deficit reached an unprecedented record, but also because the extraordinary expenditure directly linked to COVID-19 –which should be expected to disappear when new normality returns– explains little more than half of the imbalance. The other half is excess of ordinary expenditure over revenue. The fact that half of the record increase in the fiscal deficit is due to spending not directly related to COVID-19 queries the exit from the crisis.

With minimal access to public debt, fiscal imbalances have to be financed through money printing. In the first half of 2020, monetary financing of the budgetary deficit was US$ 13 billion, equivalent to 33% of public spending. The monetary expansion had little impact on inflation so far. But it is transitory since it is associated with the sharp drop in consumption due to the lockdown. As people go back to normality, the inconsistency between massive monetary printing and controlled inflation will be evident.

The reduction of the fiscal deficit depends on revenues recovery and public expenditure reductions. Doubts prevail about restoring revenue since many firms went bankrupt and a high tax burden is maintained along with promises of a generous moratorium. The reduction of expenditure requires stopping subsidies on public services, the pension system’s reform, and the closure of federal programs that overlap with local responsibilities. The programs created by the pandemic must also be deactivated when the latter is gone. Authorities suggest they plan to convert them into a “Universal Income”. If that is the case, all the existing and disarticulated welfare programs must be closed.

Many pundits compare the current crisis with that of 2002. They project with optimism that next year an economic recovery similar to that of 2003 will begin. For this comparison to be valid, the official exchange rate would have to be freed, generating a mega-devaluation similar to that of 2002. Devaluating the exchange rate would be a painful way to reduce the public expenditure in real terms avoiding the hard task of ordering the State.