﻿ The inflation rate has matched the increase in wages - IDESA

The acceleration of inflation suggests that the cycle of expansion based on consumption stimulation has ended. This is a situation that was already experienced in the past; the only peculiarity now is that the cycle was longer due to the unprecedent international favorable context. But the final result is similar: stagnation of employment and wage […] 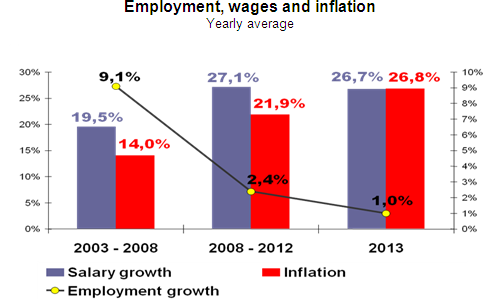 Inflation has become one of the main causes of unrest in the population. Every day, consumers perceive the loss of purchasing power due to higher prices. This adds up to the uncertainty generated by the slowdown in employment generation. In this scene, the authorities insist on minimizing the importance of inflation and continue to appeal to the same failed strategies they’ve been using as, for example, price agreements.

In the official view, the increase in nominal wages and public spending are factors that stimulate economic activity and employment. The impact of this strategy on inflation is underestimated. In part, through the manipulation of INDEC’s statistics, on the other hand, considering it as an unwanted side effect that is tolerated for the sake of boosting economic growth.

To assess the extent to which reality confirms the official diagnosis, the official data on employment and wages published by the Ministry of Economics and the National Congress should be analyzed. According to these sources:

· In 2013, formal private employment grew only 1% while the inflation rate equaled wage growth at around 27%.

These data shows that the cycle initiated at the end of the 2002 crisis has three stages. During the first period, even though inflation was very high, it was disguised with even higher increases in nominal salaries and with high employment growth. In the intermediate stage, inflation accelerates and this leads to higher wage growth, but in parallel job creation weakens. Data from 2013 suggests that Argentina has entered the third stage, where employment stagnates and the acceleration of the inflation rate reaches the growth of nominal wages.

Promoting economic growth based exclusively on stimulating consumption without attending investment is an unsustainable process. The instance in which inflation accelerates and employment and real wage stagnated is fatally reached. Such cycles have occurred many times in the history of Argentina. The particularity of the last years was that the cycle was longer. Partly, because of the depth of the 2002 crisis, which led to wages recovering at high rate until  it reached the level before the crisis in 2008. But also, because of the unprecedentedly favorable international context. The terms of trade, i.e. the relative price of exports to imports, were 30% higher in 2012 relative to 2003. Historically low interest rates add up to the extraordinary favorable context.

When the acceleration of inflation dilutes nominal wage increases and job creation stagnates, there is no room for “deepening the model”.  The authorities themselves, beyond their speech, implicitly recognize this situation when they promote wages to be set bellow inflation rate in the collective negotiation round of 2014 in a totally opposite side to their last decade’s policies.

A more promising alternative is to recognize that the prevaling economic model is exhausted and change the strategy in order to promote jobs and to increase real wages based on productivity improvement.  This requires attacking the main factor that causes inflation, which is the huge fiscal imbalance that requires a massive printing of unbaked money.  In parallel, it is necessary to establish a path of institutional reconstruction that aims to recover genuine investment and to generate productive private employment.